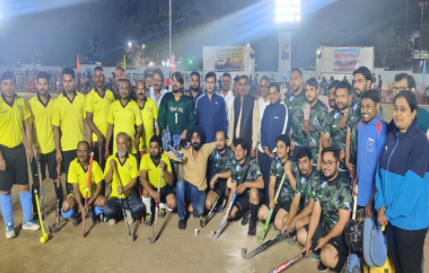 With the initiative of MLA Arun Vora and the efforts of Mayor Dheeraj Bakaliwal, for the first time state level hockey competition is being organized by Municipal Corporation Durg. On 24 February, Naresh Dakalia, former Mayor of Rajnandgaon was present as the chief guest on the semi-final match. Mayor Dheeraj Bakaliwal, Chairman Rajesh Yadav, Deputy Superintendent of Police Saba Anjum, CSP Vivek Shukla and others were present during this period. During the semi-final match, Mayor Bakliwal, Saba Anjum and Education and Sports in-charge Mandeep Singh Bhatia rehearsed the hockey game with the players. The final match will be played between the Mayor XI and the Rajnandgaon team at the Civil Line ground at 8 pm on February 25.

Both teams reached the finals on February 24 in the semi-final match by defeating the Bilaspur team 3–0 by Rajnandgaon and the District Hockey Association team by the Mayor XI 5–3. In the semi-final match, the first goal from Mayor XI was scored by Arbaaz Khan and Ghulam Rahmani scored 2 magnificent field goals to reach the team’s final. Similarly Shakeel and Karthik from Rajnandgaon gave a great performance of the game. In today’s final match, the teams of Mayor XI and Rajnandgaon will showcase their game. The winning team will then be rewarded. Mayor Bakliwal said that organizing such sports gives an opportunity to groom sports talents of the city. They are excited about the game and they display their game in a better way. During this time, the technical directors of the hockey competition, Vinita Navghare, Ghulam Rahmani, Akram Khan, Mirza and more people were present.