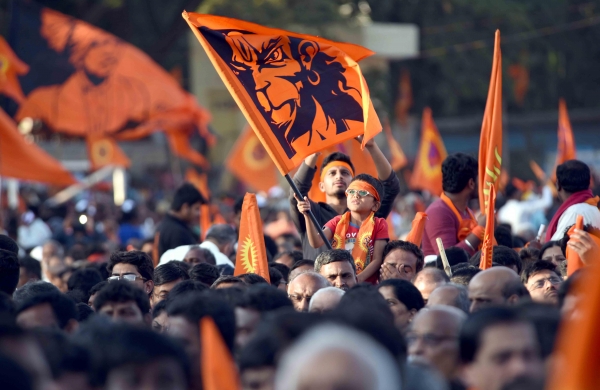 By PTI
NEW DELHI: The BJP on Wednesday lauded the Rashtriya Swayamsevak Sangh (RSS) as the “world’s biggest school of patriotism” as it slammed Rahul Gandhi for likening the Hindutva organisation to radical Islamist outfits in Pakistan.

Union Minister Prakash Javadekar told a press conference that it will take the Congress leader a long time to understand the RSS, the ideological fountainhead of the ruling BJP.

The RSS is the “world’s biggest school of patriotism” and that is why it is held in high esteem, he said. The RSS’ role is to affect good changes in people and inspire patriotism in them, he told reporters after he was asked about Gandhi’s comments.

In a conversation with Kaushik Basu, professor at the Cornell University in the US and India’s former chief economic advisor, Gandhi had alleged on Tuesday that the RSS uses schools run by it to push a particular world view like the radical Islamists in Pakistan do in madrassas.

However, he added that it was fundamentally different from the current scenario as Congress at no point attempted to capture the country’s institutional framework.

Hitting back at Gandhi, Jaavdekar said his statement was “laughable” as his party had then ended the independence of institutions, denied media freedom and jailed dissenting voices. He said lakhs of people, including MPs and MLAs, were arrested during that time while institutions were denied any freedom.

Now for him to say that they did not target institutions is laughable, Javadekar said.

The BJP leader also took a swipe at the Congress over its promise to nullify the Citizenship (Amendment) Act in Assam if it is voted to power in the state.

“The Congress party in 2015 demanded citizenship for Hindu Bengalis & Buddhists who migrated from Bangladesh, today the same Congress says that it will nullify CAA if voted to power. Consistent inconsistency & Election opportunism,” he later tweeted.

Congress general secretary Priyanka Gandhi Vadra had made the statement during her recent campaign in Assam.

Javadekar shared a 2015 news report citing the Congress’ demand for citizenship for Hindu and Buddhist refugees from Bangladesh.

Responding to a question at the press conference, the minister also rejected allegations that the Income Tax raids on the premises of filmmaker Anurag Kashyap and actor Taapsee Pannu were linked to their comments, which are seen at times critical of the BJP.

“This is too much,” he said to the question and added that “probe agencies undertake investigations based on credible information and the matter later goes to courts as well.”