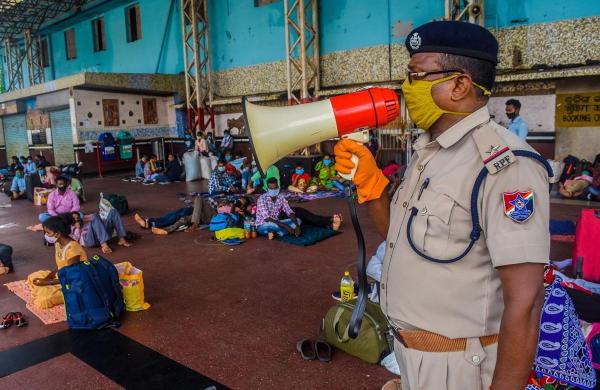 Express News Service
PATNA: After being chided by their parents for playing cricket, 13-year-old Sonu Kumar* and his brother Monu (12) decided to run away from their homes earlier this month on February 2. The siblings boarded a Patna-bound special MEMU train in Gaya. However, the railway protection force (RPF) personnel, who were deployed there, spotted and rescued them.

On January 21, Munni Kumari (15) from Daltenganj district of Jharkhand decided to leave for Mumbai in a fit of rage after her mother scolded her. On the same day. another girl, Ashia Khatoon, aged 15, left her house after an altercation with her mother and boarded a Delhi-bound train. Karan and Krishna (aged 10 and 11 respectively) were spotted at Begusaraiby the RPF when they were loitering about after their mother slapped them for not staying in and studying their lessons.

These are just a handful of many cases that the RPF personnel have helped resolve. The forces have a long list of minor boys and girls who were recovered from trains and railway stations after they eloped from their houses over domestic issues such as poor performance at schools.

The RPF cops keep strict vigil around trains and railway stations to keep an eye out for such minors, says S Mayank, chief security commissioner-cum-IG at East Central Railway headquarters in Hajipur. “Whenever a minor boy or a girl is found loitering at train platforms or in any other suspicious circumstances, the cops make sure to conduct a thorough check on such children. They are then handed over to childline units of the concerned stations for their safety and other subsequent actions,” Mayank tells The New Indian Express.

“Since 2016 till January 2021, the RPF cops have recovered over 3,674 such girls and boys who had fled away from their homes and boarded ECR trains or were found at stations.”

The RPF rescued the maximum number of children in 2017.

Child Help Desks have been set up at Patna, Pt. Deendayal Upadhaya Junction, Gaya, Dhanbad, Hajipur, Muzaffarpur, Bapudham Motihari, Darbhanga, Raxaul and Samastipur railway stations. “The Unicef officials coordinate with the railway and other agencies for better managements for rescued children. The RPF cops always maintain strict vigil to check if children are being trafficked or are running away from their homes,” Mayank claimed.

Besides this, he said that the RPF had provided food to destitute children, who were sheltering themselves at railway stations during the lockdown imposed due to COVID-19 as part of their social responsibility.

Sudhir Shukla, nodal director of Childline Help Desk at Hajipur says that stubbornness among growing children is one of the major reasons that prompt them to take such drastic steps. “Experts at the Childline helpdesk give proper counselling to children who are recovered and rescued,” says Shukla.