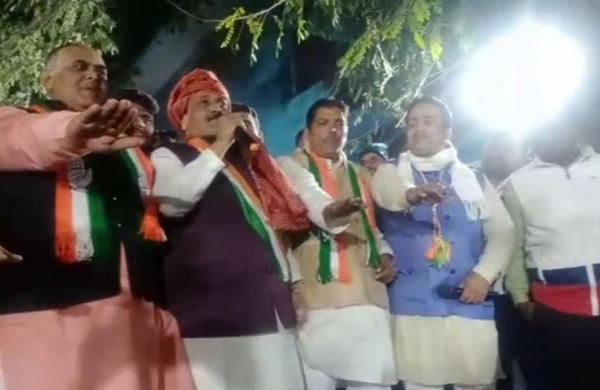 Express News Service
BHOPAL: A political row erupted in BJP-ruled Madhya Pradesh over a viral video that showed Congress leaders and workers in Indore pledging allegiance to the Quran to fight the upcoming municipal polls.

Not only the ruling BJP leaders but a prominent Muslim religious leader in Indore has also objected to using the Quaran’s name in political activities.

On the other hand, while the state Congress leaders have tried to play down the matter by saying that the Indore city party unit president committed the act by mistake, the Indore city unit president himself has said the religious oath was rendered to party workers at the internal party meeting, keeping in mind the demographic nature of the municipal ward/locality.

The viral video pertaining to an internal party meeting possibly pertains to the Muslim-dominated Chandan Nagar locality in the western part of Indore. A bunch of local Congress leaders, including possible mayoral candidates and Indore-I legislator Sanjay Shukla, and the party’s city unit president Vinay Bakliwal, are seen standing on the stage.

In the video, later the city unit president Vinay Bakliwal is seen administering the holy Quran’s oath to the party workers and leaders for unitedly backing the party’s official nominee for local municipal councilor’s post and the Indore-I legislator Sanjay Shukla for the mayor’s post.

Ruling BJP leaders, including MP minister for tourism and culture Usha Thakur, Vidhan Sabha’s Pro Tem speaker Rameshwar Sharma and state BJP spokespersons Umesh Sharma have slammed the Congress leaders for rendering the Quran’s oath to its Muslim party workers in Indore for preventing the possibility of sabotage by its own ranks in the coming municipal polls.

“The video once again exposes the Congress’s long-standing tradition of pursuing the politics of appeasement,” said MP minister Usha Thakur, who had won in 2003 from the Indore-I assembly constituency (in which the minority community dominated Chandan Nagar area is located).

The Indore-based state BJP spokesperson Umesh Sharma, meanwhile, said “The video show that Congress leaders don’t trust their Muslim party workers, which is why they are rendering oath of the Quran to their party workers in the minority community dominated area.”

A prominent Muslim religious leader of Indore, the Indore’s Shahar Qazi, Dr Ishrat Ali, objected to the use of religion in politics. “Use of religion by anyone from any community is impious. What’s the need for rendering oaths in religion’s name at any political event, it’s totally wrong and condemnable,” he maintained.

Embarrassed by the viral video, Narendra Saluja, the state Congress leader and media convener of state party president Kamal Nath said, “Congress believes in all religions and all religious texts, our city unit president has committed the act mistakenly out of ignorance.”

The Congress’s Indore city unit president Vinay Bakliwal (who is seen rendering the oath over mike in the video), however, termed the entire issue an internal matter of the Congress, which is being unnecessarily politicized by BJP.

“I can send you videos in which party workers have been rendered oath of Lord Mahavira, Lord Parshuram, and the sacred river Ganga and Narmada at other similar meetings to unitedly back the party’s official nominees in the municipal polls,” Bakliwal said on Tuesday.