Rohit Sharma and Ishant Sharma may be out from Australia tour: Report 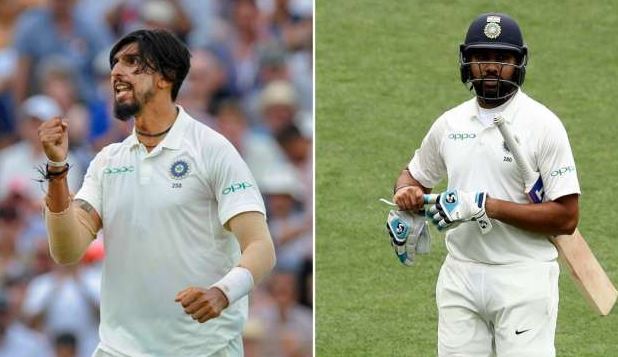 Confusion remains about the play of the batting batsman Rohit Sharma and fast bowler Ishant Sharma in the Test series against Australia. Both of them were included in the last three Tests against the Kagaru team, but both players are in rehab at the National Cricket Academy in Bangalore. The medical team of NCA is monitoring them.

Rohit and Ishant’s fitness state was discussed with the NCA team in a recent meeting. There is not much improvement in fitness of both. Informed team management, selectors and BCI have been informally informed about this. It will also be a big shock because Virat Kohli will return home after the first Test under Paternity Leave.

Earlier, India’s head coach Ravi Shastri had expressed apprehension about Rohit Sharma and Ishant Sharma participating in the upcoming Test series. He had said that if he wants to play Test, he will have to reach Australia in the next few days. Both Rohit (left hamstring) and Ishant (side strain) are on rehabilitation at the National Cricket Academy (NCA) due to a muscle strain. The Cricket Board of India (BCCI), however, has not yet given the date of his departure to Australia.

If both of them had left India on Monday, they would have been able to participate in the practice match to be played between Australia-A from December 6 to 8, given the 14-day mandatory quarantine in Australia, but it does not appear to be happening now.