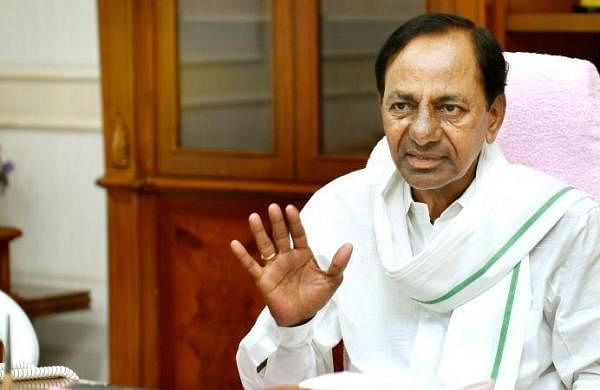 BENGALURU: While former prime minister HD Deve Gowda, who has good equations with Prime Minister Narendra Modi, appeared to be his own self, former Karnataka Chief Minister HD Kumaraswamy seemed more excited by the proposition of the third alternative force that is believed to be the backbone of TRS supremo K Chandrasekhar Rao’s desire to enter the national political stage.

The latter even stated that the new alternative force that Rao was trying shape up is necessary to “save the country”.

Rao arrived at the Gowda residence in South Bengaluru at 1.20 pm, after which the meeting over lunch and after continued until 4.45 pm. Incidentally, Rao was in Bengaluru on the day Prime Minister Narendra Modi was in Hyderabad.

It was after the meeting that Rao and Kumaraswamy addressed the media outside to announce the Vijayadasami deadline — the first time that a deadline has been set for the third alternative force, which is planned to include a range of regional like-minded parties including TRS, Aam Aadmi Party, Trinamool Congress, Samajwadi Party, among others.

However, Rao said: “Do not expect now for any sensational news … wait for two to three months … There is going to be a change at the national level, and none can stop it. India will change. It has to change. We have to rise above the ‘isms’…”

Meanwhile, one source privy to the closed-door meeting, informed that Presidential elections also came up for discussions, during which Rao is said to have asked Deve Gowda to take the lead for the alternative force.

He reportedly also suggested his candidature for Presidential elections as the incumbent President, Ram Nath Kovind’s term ends in July. However, sources close to top JDS leadership denied it.

The Telangana Rashtra Samiti (TRS) chief also said despite ‘bhaashanbaazi’ (rhetoric), industries are closing down, the nation’s GDP is crashing and the rupee is falling drastically compared to the US dollar.

“Lots of talks happen but now India will change. India has to change and take a shape for future. It has to rise despite politics, politicians and ‘isms’. Efforts should be made to change the situation of the country. After two to three months, you will get to see some sensational news,” the Telangana Chief Minister said.

Rao said he discussed everything regarding the political situation at the national level and in Karnataka during his meeting with the first family of JD(S).

The Telangana CM said he had been to Karnataka ahead of assembly elections in 2018 and predicted Kumaraswamy becoming chief minister, which turned out to be true.

“When I was there before Karnataka elections last time, I said I will come for the swearing in ceremony of Kumaraswamy, and my words were proved to be right and he became the chief minister. This time I assure you, there is going to be a change at the national level. No one can stop it,” the TRS supremo said.

Speaking about the prevailing situation, he said the country has enough resources yet it is suffering due to shortage of water, electricity and irrigation even after 75 years of independence while many nations that secured freedom along with India are way ahead of the country.

Optimistic about India’s growth, Rao said India will shine irrespective of which party rules the country.

In this regard, he called upon everyone to join in nation-building.

“Every effort should be made to build a bright India. I appeal to the journalists to contribute in this pursuit as their contribution is needed,” Rao further said.

Appealing to the journalists to shun sensation and controversial news, he urged them to hold discussions on taking the nation towards the right path as the situation is worsening.

“Today no one is happy, be it farmers, Dalits, tribals. Who is happy today? Situation is worsening day by day. What’s the reality other than rhetoric (bhaashanbazi) and promises? Industries are getting closed, the GDP is crashing, inflation is spiralling, the rupee has fallen completely. Never in history has the rupee fell to such a low level compared to the US dollar,” Rao pointed out.

“In the next two to three months, we will get you a good news,” Kumaraswamy said.

Stating that regional parties are on the rise and the only ones putting up a front against the BJP, he called upon all the regional parties to shun their differences in the national interest and come to a “common platform”.

“There is an urgency for these parties to keep aside all their differences and come to a common platform keeping in view the national interest and to save the country,” the JD(S) second-in-command said.

Noting that the Congress is on decline with each passing day, the former Karnataka chief minister hailed Rao for the vision with which he is moving ahead.

According to him, Rao’s move will lay the foundation for the future of India.

Rao arrived in Bengaluru hours before Prime Minister Narendra Modi’s visit to Telangana capital Hyderabad to participate in the 20th year celebrations of the Indian School of Business.

After the meeting with Rao, former PM Gowda tweeted, “Hon’ble CM of Telangana Shri K. Chandrashekhar Rao visited me at my residence, today. We exchanged views on various topics of national importance. It was a candid and cordial meeting.”