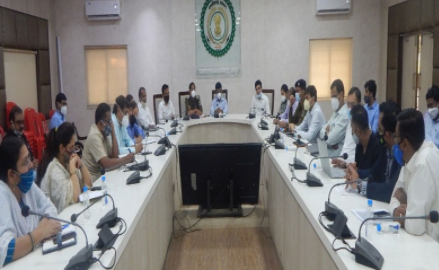 There will be a Road Safety World Series cricket tournament from March 2 to March 21 at the Shaheed Veer Narayan International Cricket Stadium Parasada to raise awareness about the importance of road safety. International players like Sachin Tendulkar, Virender Sehwag, Jonty Rhodes, Brian Lara will be included in the tournament. Preparations for the tournament are in progress. Collector Dr. S. Bhartidasan and Senior Superintendent of Police Ajay Yadav took a meeting of officials of various departments of the district regarding the tournament. Officials of the Professional Management Group, Mumbai also attended the meeting. He discussed the major points of the tournament and the arrangements being made. The Collector has given instructions to the officials at various important points for successful organizing. He has asked to discharge his duties with full coordination, so that the players, visitors and spectators return with pleasant memories of the event. He has given instructions to decide the arrangements following the instructions of Kovid-19. Officials of the Professional Management Group Mumbai reported that only fifty percent of the stadium seats would be used.