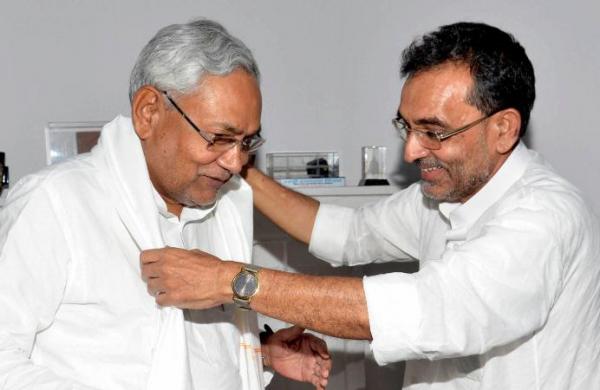 On Sunday, former Union minister Kushwaha went to meet the CM at his residence with a possible cabinet expansion around the corner. Former state president of JD(U) Vashishtha Narayan Singh also attended the meeting between Nitish Kumar and Kushwaha.

“It was the meeting between two brothers – Nitish Kumar and me. We are like brothers for a long time despite our differences in politics”, Kushwaha told the media after coming out from the CM’s residence.

Upon being asked about the political murmurs regarding RLSP’s merger with JD(U), Kushwaha did not elaborate saying this is not true. Sources said that Kushwaha is being convinced to be with JD(U) by senior leader Vashishtha Narayan Singh, who is taken in high regard by Kushwaha.

Singh told the media that the meeting was very cordial and encouraging but he also avoided speaking anything about the merger. But if a reliable NDA source is to be believed, RLSP will get some LMC seats from Governor quota if it either merges or comes in alliance with JD(U). “Upendra Kushwaha like BJP leader and former union minister Shahanwaz Hussain may also get elected to state legislative council through the quota of the Governor. Kushwaha may also get a berth in the cabinet in near future, if he joins JD(U). Talks are in progress under strict political confidentiality”, said a NDA source.

The RLSP had contested with BSP and the AIMIM in the recent assembly polls. A few days ago, the lone MLA of BSP Jaman Khan from Chainpur in Kaimur joined the JD(U). A day before Kushwaha met CM Nitish Kumar, all the five MLAs of AIMIM had met Nitish Kumar.

“After the AIMIM MLAs met CM, it was Kushwaha’s turn. So, something big is in the making. Wait for a few weeks now”, said political analyst RK Verma, adding that Nitish Kumar-led JD(U) has roped-in many sharp brains in party like RCP Singh and others to seize the opportunity.

Meanwhile, the RLSP denied merger rumours via Twitter. “The news of the RLSP merger is baseless and wrong. Considering the aspirations of the people of both Bihar and the country, the RLSP will continue its struggle”, the tweet read.

But some seasoned political analysts of Patna strongly believe that the RLSP has now no other option left after the debacle in Bihar polls but to either merge with JD(U) or come in alliance with the NDA. “Kushwaha had worked in alliance with NDA in the past and his political temperament does not differ more from others in NDA. As of now, the RLSP’s prime target is to consolidate the position in state political that has virtually weaken after recent polls with not a single seat went to it”, said political analyst Pawan Kumar Yadav.

Kumar had made Kushwaha the leader of the opposition in 2004, though he was a first-time MLA, ignoring many legislators who had suggested otherwise.

With time, Kushwaha turned a rebel and parted ways with Kumar to form his own party.

The RLSP later became a part of the BJP-led NDA before 2014 general election and Kushwaha was made a member of the Narendra Modi 1.0 government.

But, the return of the JD(U) to the NDA fold in July 2017 changed equations once again, and the RLSP quit the coalition and became a part of the RJD-headed Grand Alliance.

The Mahagathbandhan, however, suffered a severe drubbing in the 2019 parliamentary polls and Kushwaha lost the election from Karakat and Ujiyarpur Lok Sabha seats.

Weeks before the 2020 Bihar assembly elections, he walked out of the Mahagathbandhan and floated a six-party front, with Uttar Pradesh leader Mayawati and Hyderabad MP Asaduddin Owaisi as its prominent members.

The front failed miserably, but AIMIM managed to bag five seats in the Muslim-dominated Seemachal region, emerging as a new force in Bihar politics.