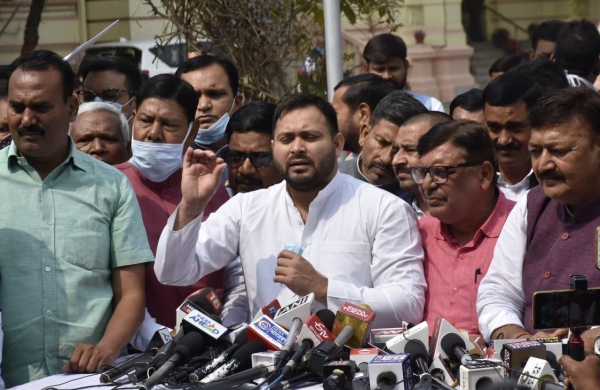 Tejashwi Yadav told reporters, “We will have a discussion about the alliance for the upcoming elections with a few local parties in Guwahati. I will also be visiting a temple to seek the blessings of Mother Kamakhya.”

The party will be fielding candidates in constituencies with Hindi speaking voters in both Assam and West Bengal.

RJD spokesperson Mritunjay Tiwari told The New Indian Express that the RJD will field its candidates on seats finalised by leaders and alliance partners.

Describing its main objective, Tiwari said that they want to “prevent BJP from coming into power in Assam, West Bengal and Kerala by winning seats and supporting the alliance partners.”

Prospective alliances in the cards for RJD are Badruddin Ajmal in Assam and Mamata Banerjee’s TMC in West Bengal as the parties are in talks.

While the doubts on who the party would align with remain, he said “it is sure that RJD will fight in the polls of these states now.”

However, no final decision has been taken regarding the number of seats to be fought on.

Recently, RJD had sent the party’s two senior leaders Abdul Bari Siddiqui and Shyam Rajak to West Bengal and Assam to explore their prospects ahead of the polls.

Leader of Opposition Tejashwi Yadav left for Assam at the end of the proceedings of the sixth day of the budget session of Bihar Legislative Assembly.

Before leaving for Guwahati, he had strongly attacked Bihar Chief Minister Nitish Kumar over prohibition of liquor.

Other parties are also jumping into the fray

Meanwhile, the JDU in-charge for the North East states including Assam, Sanjay Verma, said that his party will also field its candidates in the upcoming Assam and west Bengal elections.

The LJP, which has suffered a major setback in the Bihar polls, has also announced to contest the polls in West Bengal and other states.