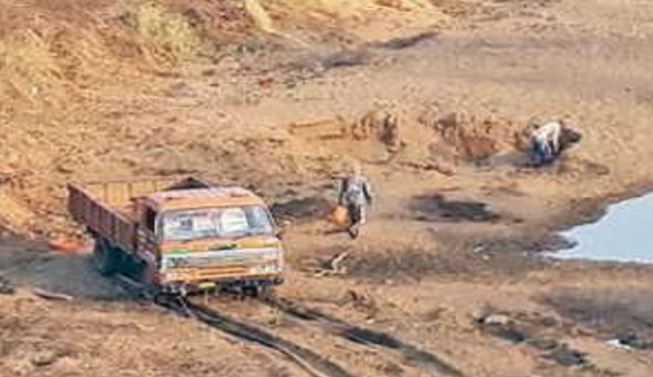 For effective control on illegal storage and transportation of minerals in the state, quick action is being taken by the joint team of officials of Revenue and Mineral Department. In this series, a team has been constituted to investigate complaints of illegal sand storage in Dhamtari district, and according to the instructions of Collector Shri Jayaprakash Maurya, a continuous investigation is being done at different places by pressing on different places.
Three teams of revenue department officials have been formed to verify the complaints received regarding illegal sand storage. Today five teams were punished by the team. During this time the spot was investigated at Mahavir Rice Mill on Sihawa Road, where illegal storage of sand was not found. Similarly, the team did not find sand storage during the Dabish at Raj Rajeshwar Rice Mill at Village Muzgahan, though small amounts of sand were found, which seemed to indicate that sand was probably stored in the east. Similarly, 3752 cubic meters of sand was found stored in Magendra fly ash bricks at village Soram. When asked in this regard, only a small amount of sand was shown to the Pit Pass by the operator, which was found not to match the amount of sand stored. The seizure was taken by the team terming it as illegal sand storage.
Under the direction of the Collector, a team of revenue officials found the sand to be stored on government land in Sarangpuri village, while wire fencing or brick wall enclosure and security and first aid facilities were not found in the storage site. Similarly, the team found lack of basic facilities like security, medical treatment, besides non-compliance of the conditions of license in village Amethi. The sarpanch of the village and Kotwar were not informed about the information of the storekeeper on this. The three teams, which conducted the inspection of illegal sand storage sites, were led by Dhamtari Tehsildar Shri Pawan Singh Thakur, Naib Tehsildar Shri Vinod Kumar Sahu and Chandra Kumar Sahu, including Revenue Inspector and Patwari respectively.