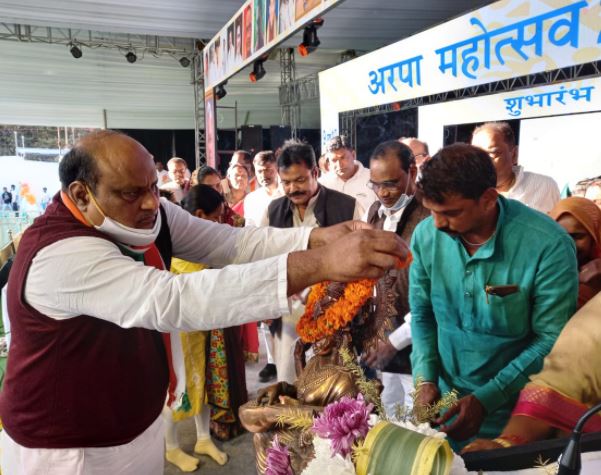 Minister in charge of Revenue and Gorella-Pendra-Marwahi district, Mr. Jai Singh Aggarwal lit the lamp and inaugurated the Arpa Festival at the government multipurpose school ground Pendra. The Revenue Minister said that Gorella Pendra Marwahi is a newly formed district and the Arpa River originates from this district. He said that at the time of district formation, Chief Minister Bhupesh Baghel had announced to organize Arpa Mahotsav. He said that for the first time after the formation of the new district, Arpa Mahotsav is being organized in the district.
Various events have been organized in the district on the occasion of the launch of Arpa Mahotsav. In the same sequence, cyclist participants from various states of the state including Collector SP participated in the Arpa Cycle Riding to be held on 7 February from Kevachi to Gagnai. Minister in-charge Mr. Agarwal said that when there is such a good atmosphere about the first year Arpa Festival, the Arpa festival is being celebrated in such a good way. There will be more organized and grand events in the coming years. After the formation of the district, all the residents of the district will have to make efforts to prove that the name of the district can be proved as an example in the state and country. MLA present at the inauguration program, Dr. K.K. Dhruva thanked Chief Minister Shri Bhupesh Baghel for giving a new direction of development for the formation of the district.
On this occasion, Bilaspur District Panchayat President Mr. Arun Chauhan, Marwahi District Panchayat President Mr. Pratap Singh Marawi Pendra Janpad Panchayat President Mrs. Asha Bablu Maravi, District Panchayat President Gorella Ms. Mamta Packra Pendra Nagar Panchayat President Mr. Rakesh Jalan, Gorela Nagar Panchayat President Mrs. Gangotri Rathore Various public representatives including Collector, Superintendent of Police and various people’s representatives were present.