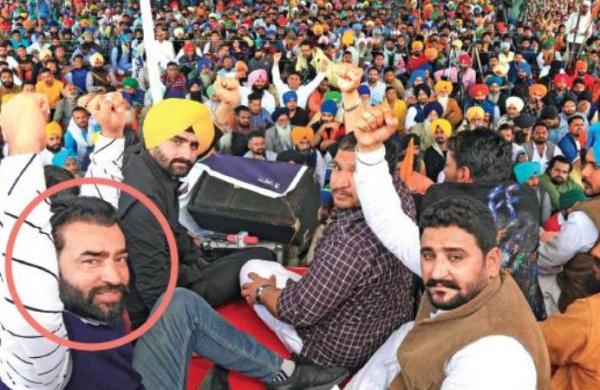 Express News Service
CHANDIGARH:  Wanted gangster-turned-activist Lakha Sidhana, a key accused in the Red Fort violence, on Tuesday attended the farmers’ rally at the ancestral village of Punjab CM Amarinder Singh in Bathinda and challenged the Delhi Police to arrest him. He also exhorted the people not to allow Delhi Police to arrest youths involved in the Republic Day incidents.

Addressing a rally in Mehraj, Sidhana told the people to gherao the Delhi Police personnel who attempted to arrest the youths.

“The Union government was arresting the people of Punjab and announcing rewards on those aiding their arrest.”

He also requested the Dalit community to participate in the protest. During the rally, Sidhana was seated on the stage. The organisers dared the police to arrest him. After the rally, he sped away on a motorcycle.

The grandfather of farmer Navreet Singh, who died in Delhi on January 26, and a relative of Harbhagwan Singh, who had died in the Behbal Kalan firing, were also present at the rally, besides AAP MLA Kultar Singh Sandhawa and Yudhvir Manak, son of Punjabi singer Kuldeep Manak.

The Delhi Police have announced a reward of Rs 1 lakh for information about Sidhana. He had on Saturday released a video urging Punjab’s youth to attend the farmers’ rally in Mehraj.

Meanwhile, Delhi Police has arrested two more persons, including a prominent farmer leader, from Jammu for their alleged involvement in the Red Fort violence. Jammu and Kashmir United Kisan Front chairman Mohinder Singh and Mandeep Singh, were brought to Delhi for questioning.