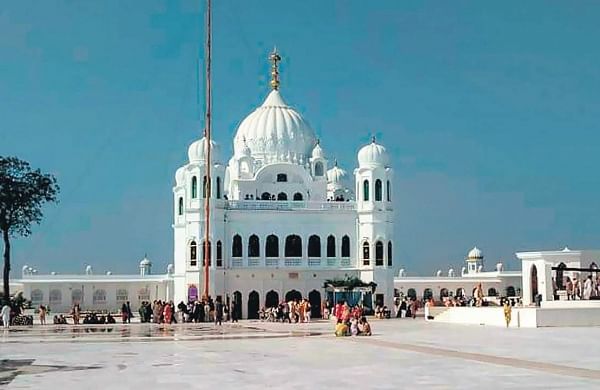 CHANDIGARH:  With Punjab Assembly elections a couple of months away, all political parties in the state are playing ‘religious card’ to woo voters. A day after Kartarpur corridor to Pakistan was reopened, Chief Minister Charanjit Singh Channi along with 30 people, including a few of his cabinet colleagues, paid obeisance at the Darbar Sahib Gurdwara in Kartarpur of Narowal district of Pakistan using the visa-free corridor. Channi urged both India and Pakistan to simplify the procedure to visit the shrine.

Channi after returning from Kartarpur termed it a historic occasion as the corridor has been reopened after the pandemic. However, he said both the national governments of India and Pakistan should make efforts for simplifying the process to help pilgrims.

Channi, who was accompanied by his family members, Finance Minister Manpreet Singh Badal, PWD Minister Vijay Inder Singla, MLAs Harpartap Singh Ajnala and Barindermeet Singh Pahra crossed over to Pakistan at around 1 pm and came back after a few hours.

Sidhu uploaded over an hour-long video, comprising several clippings of his visits to various places in Pakistan, including Islamabad, Lahore and Gurdwara Darbar Sahib in Kartarpur itself.

The video clips dated back to between August and December 218.

Sindhu realsed the video on his Twitter handle @sherryontopp and named it as The Kartarpur Story.

In the complied videos, he showed several developments related to the opening of the Kartarpur corridor.

In his tweet, Sidhu said, “Guru Nanak’s teachings are the centrifugal force of Sikhism, he is the light house that guides us on the path of Universal Brotherhood, Peace & wellbeing of all. Sarbat da Bhala is our guiding force.”

Sidhu, meanwhile, will be visiting Sultanpur Lodhi in Kapurthala on Friday on the occasion of the birth anniversary of Guru Nanak Dev.

The first Sikh Guru lived in Sultanpur Lodhi for some years before setting out on his travels to deliver his message among the masses.

Notably, Sidhu was not part of the Channi-led ‘jatha’ (group) which went to offer prayers at the Gurdwara Darbar Sahib in Pakistan after traveling through the visa-free Kartarpur corridor that reopened for pilgrims after a gap of 20 months.

Sidhu’s media advisor Surinder Dalla on Wednesday night had said the Congress leader had been officially intimated that he could go on November 20 instead of November 18.

Sidhu had made preparations for visiting the Kartarpur Sahib on Thursday but was disappointed after learning of not being the part of the ‘jatha’ going on Thursday, Dalla had said.

Replying to a query on Sidhu, Punjab minister Vijay Inder Singla on Thursday said the government of India has given permission for traveling to Gurdwara Darbar Sahib in Pakistan to Cabinet ministers and MLAs in a phased manner.

“Some got permission (to visit Kartarpur Sahib) for today, some for tomorrow and others for the day after tomorrow,” said Singla.

Earlier in the day, a 21 member delegation of Punjab BJP leaders lead by Punjab BJP president Ashwani Sharma visited the gurdwara via the corridor.

Sharma said he was thankful to the Prime Minister and the home minister for reopening the corridor to allow devotees to offer prayers ahead of the birth anniversary of Guru Nanak Dev.

Among those who were part of the BJP ‘jatha’ included Harjeet Singh Grewal, Jeevan Gupta, Tikshan Sud and Subhash Sharma.

On Friday a delegation of Punjab AAP leaders is expected to pay their obeisance at the shrine. Senior AAP leader and Leader of Opposition Harpal Singh Cheema said all party MLAs have applied for permission from the Union government to visit the shrine.

Badal also alleged Channi was responsible for the mushrooming of illegal colonies in the Kharar-Ropar belt in the state.