Release more water in Yamuna, priests appeal to PM Modi ahead of Kumbh 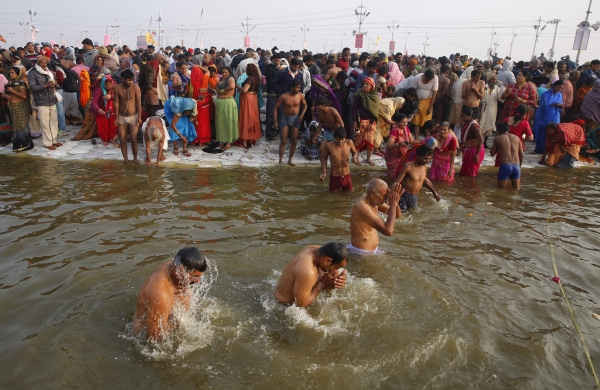 By PTI
MATHURA: The All India Teerth Purohit Mahasabha on Friday urged Prime Minister Narendra Modi for increasing the Yamuna’s water flow, an apparent reference to the use of two canals linking it with the Ganges, to make it fit for bathing before the auspicious ‘Shahi Snan’ on March 9.

While the arrangements made for the Vrindavan Kumbh by the government of Uttar Pradesh are commendable, the polluted Yamuna water mars the efforts, the outfit’s president, Mahesh Pathak, said here, adding that three ‘Ani Akhadas’ (Hindu religious groups) have warned of a boycott if the river water is not clean.

Upset over the pollution in the Yamuna at the Devarha Ghat on the first ‘Shahi Snan’ (auspicious bath) at the Vrindavan Kumbh, the Nirvani Ani Akhada, Digambar Ani Akhada and the Nirmohi Ani Akhara had on February 27 declared that they would boycott taking a dip in the next one if the water is not clean.

The second and the third “Shahi Snan” are slated for March 9 and 13, Pathak said.

“Please instruct the department concerned to discharge sufficient water into the Yamuna so that feelings of seers and common people are not hurt while bathing at the Devarha Ghat in Vrindavan Kumbh,” he said.

Another member of the organisation requested the Union government to find a permanent solution to the problem.

Off the ground: An ‘Olympics’ with a traditional twist in Chhattisgarh