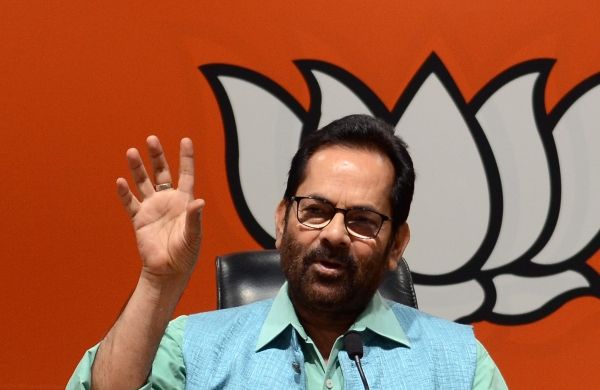 By PTI
KANPUR: Senior BJP leader and Union minister Mukhtar Abbas Naqvi on Saturday said “rejected politicians” and the “bogus Bharat bashing brigade” are involved in a criminal conspiracy to defame the country.

Speaking to reporters here, Naqvi said, “Such criminal syndicate of misinformation and Bharat bashing has always been defeated by the commitment of the people of India.” “Such people created a ruckus on the so-called intolerance in the country, raised questions on surgical strike on Pakistan, created confusion over CAA, and opposed steps taken for the well-being of people during the COVID-19 pandemic,” Naqvi said.

Now, the ‘gumrahi’ (misleading) gang has hijacked the farmers’ agitation and doing politics over it, he said, adding that some people in the country still have “feudal arrogance”.

In a statement, Naqvi said the people of the country, while rejecting all criminal conspiracies and political hypocrisies of some vested interests, have expressed trust in the leadership of Prime Minister Narendra Modi.

The masses have supported the policies of the prime minister by giving “tremendous support” to the BJP in assembly, panchayat and local bodies elections in different states and union territories, he said.

“On one hand, the Bharat bashing brigade raised false and fake propaganda of so-called insecurity among minorities, on the other hand PM Modi worked tirelessly to make all sections of society including minorities an equal partner of mainstream development,” he said.

The entire world is admiring Modi’s commitment towards inclusive development,” he added.

Naqvi said, “When our security forces destroyed terrorist camps by conducting a surgical strike, then some people outside the country and leaders of the grand old party, demanded proof.

It was an amazing ‘jugalbandi’.”

The Union minister said the Citizenship (Amendment) Act, 2019 provides citizenship to persecuted minorities from three countries, but some people deliberately created confusion by linking the Act with the citizenship of Muslims of India.

These people with narrow political self-interests tried to “hide the mountain of truth with bushes of lies”, he said.

Naqvi said the Union Budget 2021-22 is a gazette of the glorious journey of ‘Aatmanirbhar Bharat’ and will ensure development with dignity of all sections of the society.

The budget fulfils the expectations and aspirations of all sections — poor, farmers, youth, senior citizens, women, labourers, and small traders, he said.

It will bring revolutionary reforms in the country’s health infrastructure, MSMEs, and education and research sectors which will help generate ample employment opportunities.