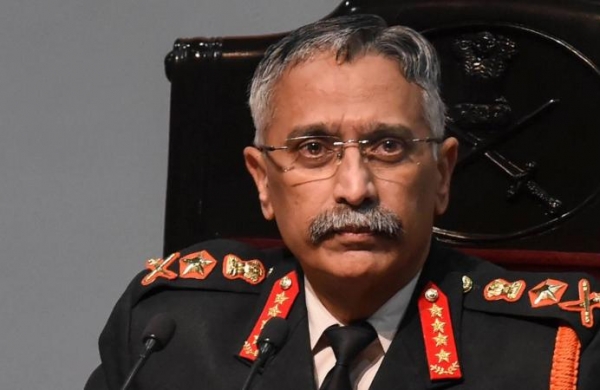 Express News Service
NEW DELHI: Army Chief on Monday underlined an environment of distrust prevailing due to Chinese belligerence and its hostile approach towards neighbours in the region.

His statement on Friday came while the troops of China and India were involved in disengagement after a prolonged nine month standoff at the Line of Actual Control in eastern Ladakh.

General MM Naravane said, “The rising footprints of China in India’s neighbourhood and its attempts to unilaterally alter the status-quo along our disputed borders have created an environment of confrontation and mutual distrust.”

The Indian Army chief said this while speaking at a webinar organised by United Service Institution of India and the Assam Rifles on “Evolving security challenges in the north east and way forward”.

ALSO READ: US welcomes efforts by India and China to de-escalate situation in eastern Ladakh Army Chief added that the Chinese behaviour is also leading to regional imbalance and instability. “The regional security environment is characterised by Chinese belligerence in the Indo-Pacific, its hostility towards weaker nations and relentless drive to create regional dependencies through initiatives like the BRI. The resultant Sino-US rivalry has created regional imbalances and instability,” said the Chief.

He added, “Regional and internal connectivity is acutely linked to security. It is central to unleashing the potential of the North East and balancing the influence of China. With failure to deliver on promises, delivery deficit has plagued our efforts at improving regional connectivity,” The Kaladan multimodal transport project and the trilateral highway have both seen cost and time overruns, he pointed out.

The chief also talked about Nepal and the changes due to China.

“Nepal, our traditional long term partner, which has witnessed heavy Chinese investment, is going through a period of political volatility,” he said.

Based on the contemporary security situation, the entire north east region was divided into pockets of least resistance, partial resistance and pockets of active resistance to roll out a phased disengagement plan of the Army from the Counter Insurgency (CI) deployment.

The chief said that while the red belt along the India-Myanmar border requires a permanent Army and Assam Rifles grid for effective border management, the changes on ground have led to reorientation of the Army.

He said the force calibration has already resulted in disengagement of 14 Infantry Battalions. “Two Division headquarters, earlier part of the CI grid, are now solely focusing on their operational role along the Northern borders. This has been a significant achievement. The operational responsibility of these areas has now been taken over by the Assam Rifles,” the chief added. Talking about the support of Myanmar in improvement of the situation, the Army chief said, “A series of operations under ‘Operation Sunrise’ with Myanmar Army have witnessed growing cooperation and synergy between the soldiers on ground with reasonable operational dividends,” he added. The chief said while pointing out that Bhutan has been cautious in its approach, “we have seen an upswing in our relations with Bangladesh.”

India is celebrating Swarnim Vijay Varsh to commemorate its splendid victory over Pakistan in the 1971 War for Liberation of Bangladesh. “The ongoing dynamics in these neighbouring countries directly impacts the security environment in India’s North East. A large number of initiatives are already underway to leverage military diplomacy with our Eastern Command playing the spring-board for fostering stronger bilateral relations,” he added.