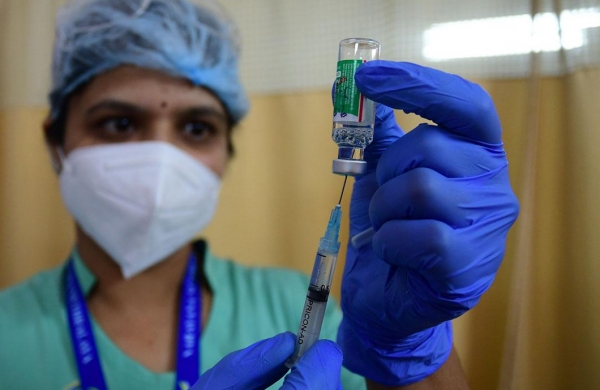 Express News Service
NEW DELHI:  The latest study indicating that the existing Covid-19 vaccines may have reduced efficacy against the B.1.617 variant of SARS CoV-2 has prompted many experts to urge the Centre to rethink its vaccination policy using fresh modelling and serosurveys. The B.1.617 variant of Covid- 19 is largely responsible for the ferocious second wave of the pandemic in India and has reached many countries, including the UK. The Indian government had recently decided to raise the gap between two doses of Covishield vaccine to 12-16 weeks from the earlier suggested interval of 6-8 weeks.

Though the government insisted that it was being done at the behest of technical input from the expert panel on vaccinations, many believe that this was mainly done due to the acute shortage of Covid-19 vaccines in India. The new data from the UK, as per a study carried out by Public Health England, suggests that the two doses of the AstraZeneca vaccine offer just 60% efficacy against the infection, while the protection after only one dose is much lower.

Sources in the National Expert Group on Vaccine Administration for Covid-19 told this newspaper that they were studying the new data while pointing out that lab studies from India have confirmed that both Covishield and Covaxin, the two major vaccines being used in the country, offer protection against various variants. Some experts, however, emphasised the need of revisiting the country’s vaccination policy in the light of new data.

“Modelling and serosurveys are urgently needed to optimise strategy for India in the view of the limited supply (of Covid vaccines),” she said. Virologist Sudhanshu Vrati, while maintaining that the lower efficacy means reduced protection between two doses of a vaccine, said any decision will have to be taken keeping in mind the vaccine scarcity.