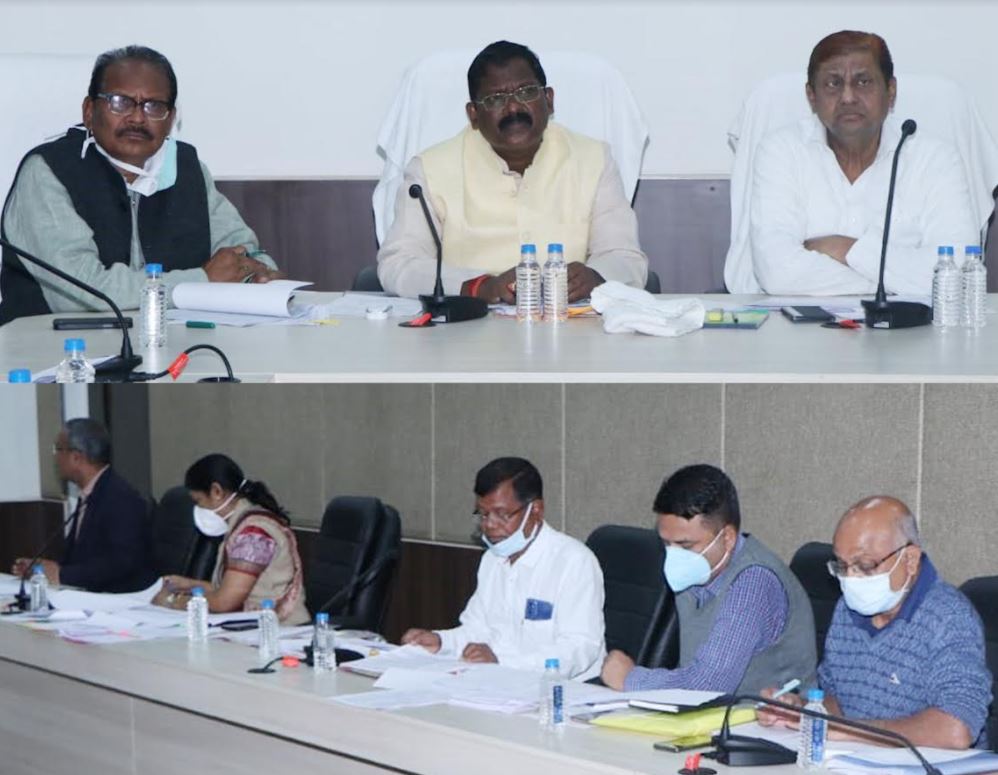 Due to the recent unseasonal rains in Chhattisgarh, the ministerial sub-committee has taken seriously the dampening of paddy crop in the paddy procurement centers. Adequate amount was made available to the cooperatives for various arrangements including cap cover, talpatri to protect the paddy from rain in the paddy procurement centers, even after this, in view of the negligence done to prevent the paddy from getting wet due to unseasonal rains, the committee decided to do so. The Ministerial Sub-Committee has recommended issuance of notices to the Collectors, District Marketing Officers and Deputy Registrars of Kawardha, Rajnandgaon, Dhamtari, Mahasamund and Raipur districts. However, there was no damage to the paddy. Under the chairmanship of Food Minister Shri Amarjit Bhagat, he expressed his displeasure over the incident of paddy soaking in paddy procurement centers in the meeting of the Cabinet Sub-Committee regarding the arrangement of paddy procurement in Kharif Marketing Year 2021-22 here today. He said that an alert regarding rain had already been issued by the Meteorological Department. Along with this, amount was also released by the government for paddy security and other arrangements. Even after this, why were strict arrangements not made to save the paddy from getting wet. He said that along with the purchase of paddy, it is our responsibility to protect it. Why physical verification was not done regularly before and after rain. Had the capcover, taalpatri and other necessary arrangements been ensured at the right time, then the situation like paddy soaking would not have arisen. He instructed the officers to take special care that such recurrence does not happen in future. Forest and Transport Minister Mr. Mohammad Akbar, Cooperation and School Education Minister Dr. Premsai Singh Tekam were also present in the meeting. In the meeting of the Cabinet Sub-Committee, information was taken about the situation regarding the soaking of paddy. During discussion with the officials, it became clear that in 6 districts including Bemetara, Kawardha, Rajnandgaon, Dhamtari, Mahasamund and Raipur, a total of 38 thousand tonnes of paddy is drenched in rain, it can be dried and milled. In the paddy procurement centres, the soaked paddy bags have been overturned and dried, due to which there is no damage to the paddy. In the meeting, the situation of procurement centers affected due to untimely rains, availability of gunny bags, paddy procurement system, custom milling and transportation of paddy, collection, storage and maintenance were discussed in detail. In the meeting, the officials informed that against the target of purchasing 105 lakh metric tonnes of paddy on support price this year, so far 58.64 lakh metric tonnes of paddy has been procured from more than 15 lakh farmers. In lieu of paddy purchase, Rs 10 thousand 934 crore 50 lakh has been released by Markfed to the farmers under the bank linking system. The lifting and transportation of paddy for custom milling is being done rapidly. In the meeting, the officers were instructed to ensure speedy lifting and transportation of paddy as per the target of depositing 61.65 metric tonnes of rice in the central pool. It was informed in the meeting that 5.25 lakh bales of gunny bags are required for the purchase of paddy on support price. Presently, there is no problem in the paddy procurement system due to supply of gunny bags from PDS, millers and farmers. Adequate quantity of gunny bags and HDP gunny bags have been arranged by the government for the purchase of paddy. Special Secretary, Food Department, Shri Manoj Soni, Special Secretary, Cooperatives, Shri Himshikhar Gupta, Managing Director of Markfed, Shri Kiran Kaushal and other senior officers were present in the meeting. Like this:Like Loading… Continue Reading