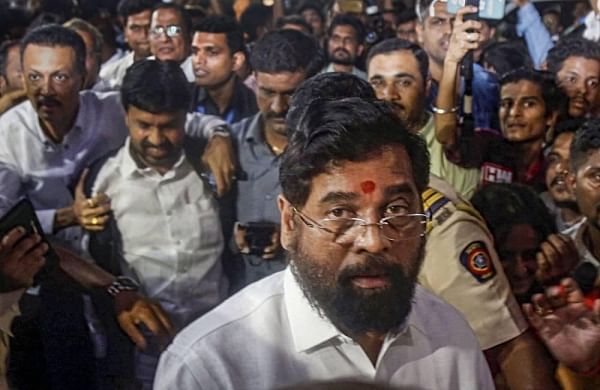 MUMBAI: Launching a fresh attack on Shiv Sena leadership, dissident leader Eknath Shinde on Sunday wondered how could Bal Thackeray’s party support the people having a direct connection with Dawood Ibrahim who was responsible for killing innocent Mumbaikars by triggering bomb blasts.

He said the banner of revolt was raised by him and other MLAs to protest against such support and he doesn’t care for his life in the bid to save Bal Thackeray’s Shiv Sena.

Shinde’s tweets on Sunday night are an apparent reference to Nationalist Congress Party (NCP) minister Nawab Malik who is in jail in connection with a money laundering case allegedly involving relatives of Dawood Ibrahim.

The tweets are also seen as a reply to Shiv Sena MP Sanjay Raut who had termed Shinde and other rebel MLAs “bodies without souls” which will be sent to the morgue.

“How can Hinduhridaysamrat Balasaheb Thackeray’s Shiv Sena support those who have a direct connection with Dawood who killed innocent Mumbaikars by carrying out Mumbai bomb blasts? We are taking this step to oppose this; Don’t care if this step leads us to the brink of death,” Shinde tweeted in Marathi.

In another tweet, the senior Shiv Sena leader said they will consider themselves fortunate if they die while saving Shiv Sena and the ideology of Bal Thackeray.

Earlier in the day, Raut had termed Shinde and other rebel MLAs as “bodies without souls” which will be sent to the morgue.

“We have learnt a lesson on whom to trust… These are the bodies whose souls have died. Their mind is dead ….40 bodies will come from Assam and will be sent directly to the morgue for postmortem,” Raut had said in an apparent reference to the number of MLAs camping in Guwahati with Shinde while addressing Sena cadres.