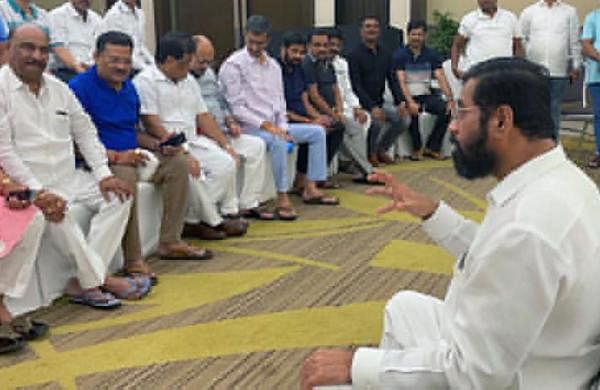 GUWAHATI: Perhaps feeling bored after staying put at a hotel in Guwahati since Wednesday, Eknath Shinde on Friday went out on an outing to an undisclosed location in the city. The sudden departure of the Shiv Sena leader, who is leading party’s rebel MLAs, triggered speculations that he was Maharashtra-bound. But he returned two and half hours later.

He had moved out of the five-star Radisson Blu in an SUV, accompanied by Assam BJP MP Pallab Lochan Das. He returned in a “multipurpose” private car of a senior police officer. Das was not accompanying him now.

Mystery shrouds over the place in the city that Shinde visited. A Sena MLA told journalists outside the hotel that Shinde had gone out to offer his prayers at the Kamakhya temple. The same, however, could not be confirmed from the temple authorities. “I am sick. I absolutely have no idea about it,” the temple’s chief priest Kabindra Prasad Sarma told this newspaper. Some others at the temple also expressed ignorance.

The ruling BJP ministers, MLAs, leaders, as well as the state machinery, are maintaining a stony silence on the Sena matters. “Things are being monitored at the highest level from Delhi. As such, nobody is opening up,” a source from the RSS said.

The hotel, where the MLAs are holed up, has been virtually turned into a fortress with a posse of policemen guarding it round-the-clock and kept out of bounds of people.

The “Laxman Rekha” for media persons, who have come from different states including Maharashtra, has been drawn at the hotel’s entrance, some 150-200 metres away. Lunch is served to them by the hotel. Nobody knows the sponsor.

Only a select few, including BJP MPs, ministers and MLAs, have access to the hotel. It is not entertaining fresh bookings. Seventy rooms were booked for the MLAs for seven days. The tariff for seven days, sources said, is Rs 56 lakh. The total cost, including food, was estimated to be Rs 1.12 crore.

A Shiv Sena worker, believed to be loyal to Maharashtra Chief Minister Uddhav Thackeray, and several protesting Assam Congress leaders were picked up by the police from outside the hotel on Friday.

Holding a placard, Sanjay Bhosale, who claimed he is the deputy chief of Shiv Sena’s Satara district unit in Maharashtra, was appealing to the Sena rebels to return to Maharashtra and reconcile with Uddhav. But the police picked him up and took him to a police station.

A police officer told journalists the person was detained for interrogation. “We don’t know who he is and where he has come from. It’s now a sensitive area and we have to ensure the security of everyone. So, we will talk to him lovingly at the police station and find out his details,” the police officer said.

The Congress leaders were detained for staging a protest outside the hotel. The Congress said its state chief Bhupen Borah had written to Shinde earlier in the day requesting him to leave the state along with the fellow MLAs in Assam’s greater interest.