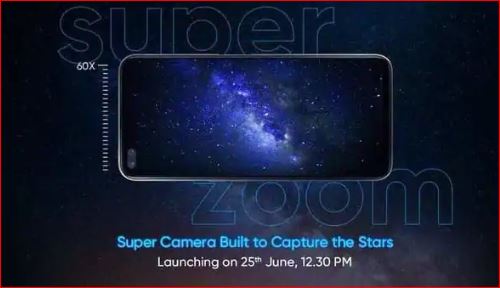 Realme X3 SuperZoom was first launched in European countries in the month of May. Now the Chinese company will be launching the device in India. The name SuperZoom stands for the 60X combined zoom that the device offers.

The launch event of the Realme X3 SuperZoom will begin at 12:30pm today. The event can be streamed live via the company’s official YouTube channel. To access it, the user can click here.

Realme will be launching more products alongside the Realme X3 SuperZoom. The company will unveil new budget-oriented True Wireless Earphones (TWS) called Realme Buds Q. The Chinese brand will also launch the Realme Adventurer Backpack which will be its debut in this new product category.

Since the device has already been launched in other countries, the specifications are known. The Realme X3 SuperZoom comes with a 6.6-inch FullHD LCD screen with a refresh rate of 120Hz. The choice of using an LCD panel kept the phone from using an under-screen fingerprint sensor. Instead, Realme has opted for a side-mounted fingerprint sensor on the power button.

In terms of the optics, Realme has used a quad-camera setup. The company has housed a 64MP camera, an 8MP sensor that offers 5x magnification, an 8MP ultrawide lens and a 2MP macro lens.

The phone was launched at a price of 499 euros (Roughly ₹42,500) for the single variant with 12GB of RAM and 256GB of internal storage. The Indian price is expected to be more competitive.