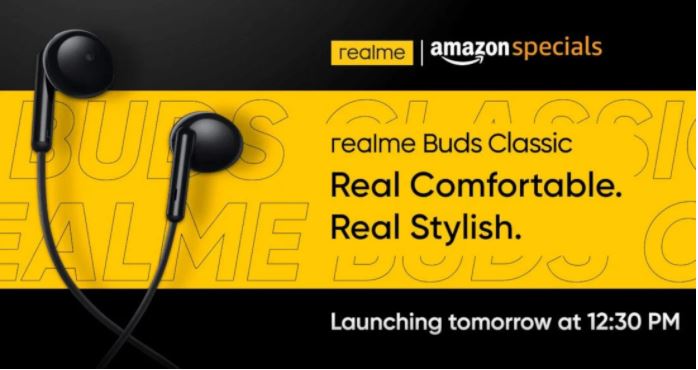 Last month, Realme India CEO Madhav Sheth had revealed that the company plans to launch new earphones in the market in August. Now, the company has officially confirmed that the Realme Buds Classic will be launched in India on 18th August.

The launch of these new earphones will take place along with the launch of two budget smartphones from the company — Realme C12 and Realme C15, both of which are powered by a 6,000mAh battery.

Coming back to the earphones, the company has already been confirmed that the wired Realme Buds Classic will come with a new half in-ear design compared to in-ear design in the earlier models.

Further, it has been revealed that they will feature bigger 14.2mm drivers and will offer richer bass and clear vocals. There’s also a single-button remote for controlling calls and music along with an in-line microphone and built-in cable organizer.

The company’s teaser image also hints that the earphones will be made available in two color options — Black and White. The pricing for the Reale Buds Classic is expected to be lower than the original Realme Buds. They will go on sale exclusively through Amazon and Realme India online store. To know more, we will have to wait for a few more hours.