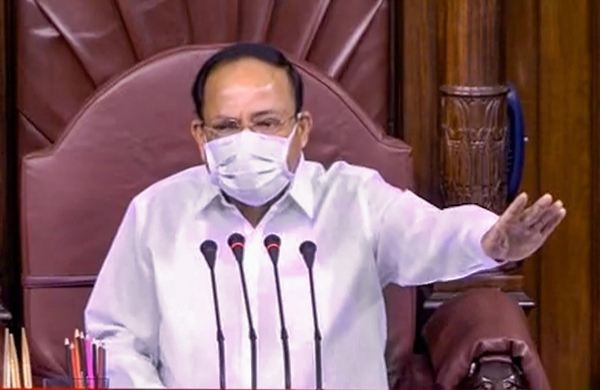 By PTI
NEW DELHI: Vice President and Rajya Sabha Chairman M Venkaiah Naidu on Monday expressed sadness when his non-partisan approach was questioned by an MP, but said he would not be cowed down by attempts to make the Chair dysfunctional.

When the Rajya Sabha met for the day, Vijai Sai Reddy of the YSR Congress sought to raise certain remarks made by a TDP member a few days ago and demanded action.

Without naming anyone or pointing to the remarks, Reddy raised the issue through a point of order.

He said objectionable parts should be expunged from the records.

Naidu said this was not a point of order issue and the member should write to him.

He promised to examine the record and expunge anything that is found objectionable.

Reddy, however, was not satisfied and continued to speak despite his mike being turned off and the Chair ordering that nothing would go on record.

During this time, Reddy cast aspersions on the Chair.

“You are saying the chairman is biased,” Naidu remarked.

Later, Jairam Ramesh of the Congress said certain references were made at the Chair by the member.

“They were highly objectionable references. I would request you to take note and take action.”

He was joined by other members who too demanded an action.

“Never has it happened (before),” he said.

Explaining the procedure, he said if anything objectionable is said inside the House during a debate or discussion, the same can be brought to the notice of the chairman, who after examining it would expunge such remarks.

“To my knowledge, nobody raised an objection or protested. Nothing was brought to my notice,” he said, referring to the objectional statement a few days back.

Yet, the same can be brought to the notice of the chairman even later, he said, adding a notice can be given.

“I would go through it and take appropriate action,” he said.

“But this sought of (remarks), in spite of the chairman saying this is not done, (the member continued to) continuously make allegations.”

The idea, he said, is to make the chairman “dysfunctional.

“Naidu went on to state that he has no problem if action is initiated for no-confidence in the chairman according to the rules.”

“But I will not be cowed down by this sort of effort to make the chairman dysfunctional,” he said.

He said he had resigned from the BJP before accepting the post.

“Since then I have not been going to political programmes or attending such functions that were affiliated to a particular political party. Because of this constitutional responsibility,” he said.

This, he said, was proper in his opinion and he has followed it till now.