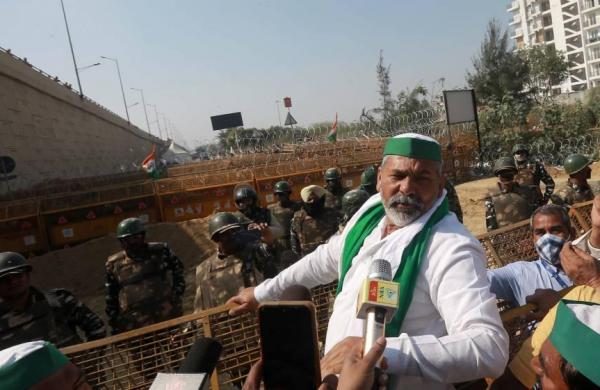 By PTI
NEW DELHI: Protesting farmer unions Saturday said they are ready to resume talks with the government, but asked it to come up with a fresh proposal as the existing offer to put the three farm laws on hold for 12-18 months is not acceptable to them.

The unions, however, made it clear that they would not settle for anything less than the repeal of the three contentious laws.

“We are ready to talk. The ball is in the government’s court. We clearly told them that their last proposal (of suspending the farm laws for 12-18 months) was not acceptable to us. Now, they should come up with a new proposal,” he told reporters.

The Samyukta Kisan Morcha, an umbrella body of farm unions leading the protests at the city border points, thanked all global personalities for their support to the protests.

“It is a shame that at the behest of the government, some people want to suppress this movement by calling it as an ‘internal matter’, but it is necessary to understand that in democracy, people are superior, not the government,” it stated.

The assertion comes in the backdrop of support extended by some global celebrities such as singer Rihanna and climate activist Greta Thunberg to the farmers’ protests against the three laws.

Talking about the Saturday’s ‘chakka jam’, the farmer leader claimed it got a huge nationwide support which once again “proved” that farmers across the country are united against these farm laws.

“He (Tomar) insulted the struggle of farmers of India by saying that only one state’s farmers are opposing the agricultural laws,” Pal said.

Countering the Opposition’s claim that farmers across the country are agitated over the three laws, Tomar had on Friday said in Rajya Sabha that peasants of just one state are being misinformed and instigated.

After the 11th round of talks on January 22, the government’s negotiations with the representatives of thousands of protesting farmers had hit a roadblock as the unions had rejected the Centre’s proposal to put three contentious laws on hold.

The government had asked unions to revert by January 23 in case they agree to the suspension proposal and the talks can continue only thereafter.

However, the unions remained firm on their demands.

“Despite all the conspiracies of the government and anti-social elements, the SKM stands on the demand for the complete repeal of all the three laws and legal guarantee of the MSP,” Samyukta Kisan Morcha said in the Saturday statement.

India had Wednesday hit out at global celebrities such as singer Rihanna and Thunberg for their support of the farmers’ protests, the focus of a sharply polarised international debate that saw several Bollywood and cricket stars and top ministers rally around the government in its pushback.

The SKM claimed that according to the information compiled so far, 204 agitators have died in the ongoing movement, but the government is still ignoring the pain of farmers.

Thousands of farmers, mostly from Punjab, Haryana and western Uttar Pradesh, have been camping at three Delhi border points — Singhu, Tikri and Ghazipur — for over 70 days, demanding a repeal of the three farm laws.

Farmer leader Rakesh Tikait on Saturday called on peasants across the country to join the “tractor revolution” as part of the ongoing protests at Delhi’s borders against the new agri laws introduced by the Centre.

During a speech to supporters at the Ghazipur protest site, Tikait reached out to the farming community, many of whom especially in the Delhi-NCR region have been upset over the National Green Tribunal’s ban on diesel vehicles, including tractors, that are over 10 years old.

He said more and more farmers across the country will participate in the ongoing farmers’ stir for rollback of the contentious laws.

Recently, 20,000 tractors were in Delhi and the next target is taking that number to 40 lakh, Tikait said.

He also called on tractor owners to attach their vehicles with the ‘tractor kraanti’ (tractor revolution).

“Write ‘Tractor Kranti 2021, 26 January’ on your tractors. Wherever you will go, you will be respected. We have a target of 40 lakh tractors,” he said.

The Bharatiya Kisan Union (BKU) leader, whose emotional appeal recently had revived the protest that was losing momentum post the January 26 violence in Delhi, also called on villagers to bring a fistful of soil from their farmlands to the agitation sites and take back a similar amount of ‘mitti’ of the revolution from the protest sites.

Exhorting supporters to keep the momentum going, he asked them to be prepared to reach protest sites as the agitation at Ghazipur, Tikri and Singhu border points of Delhi could go on till October.

“Be prepared at villages, whenever a call is made, reach the protest the way the youth (from Haryana and Uttar Pradesh) has done (after the January 26 episode),” he said.

Ghazipur has earlier witnessed the influence of Tikait over the farmers’ community in north India when hundreds of people, including women and children, from villages in Uttar Pradesh, Haryana, Rajasthan and Uttarakhand reached here with water and home-made food on the BKU leader’s call.

Tikait had made a call for water and food from villages following disruptions in water supply at the protest site by local authorities in the wake of the January 26 violence.