RCB coach Katich came in defense of Virat Kohli, this thing somewhere in favor of Virat 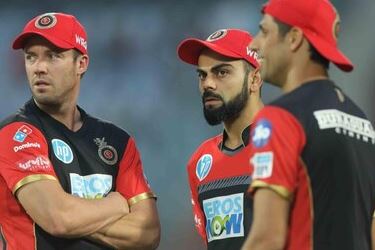 Royal Challengers Bangalore (RCB) head coach Simon Katich has defended skipper Virat Kohli, who faced criticism for not winning the IPL title under his captaincy for eight consecutive years, saying RCB still needed him. RCB are out of the tournament after losing by six wickets to the IPL eliminator from Sunrisers Hyderabad on Friday. With this defeat, Virat’s dream of winning the IPL for the eighth consecutive year under his captaincy was broken and he is facing severe criticism.

Former India opener Gautam Gambhir has also said after RCB is out of the tournament that RCB should now look for a new option in place of Virat for the captaincy. Gambhir said that the time of eight years is too long and if a team fails to win a single title during this time then the captain should be held accountable for this. He said that he is not against Virat but now the time has come that this 32-year-old player should step aside from the responsibility of captaincy in IPL.

Katich, while defending Virat’s leadership, specifically mentioned his two important features in a media interaction on Saturday. According to Katich, the first feature is that Virat guides the players very well and his second quality is that he motivates the young players to struggle till the end.

The RCB coach believes that Virat has provided the best guidance to opener Devdutt Padikal, who made his IPL debut from this season. RCB batsman Devdutt has scored 473 runs this season, including five half-centuries. Katich said, “We are very lucky to have these 11 weeks of work with Virat. Virat is very professional and all the players here respect him very much. “