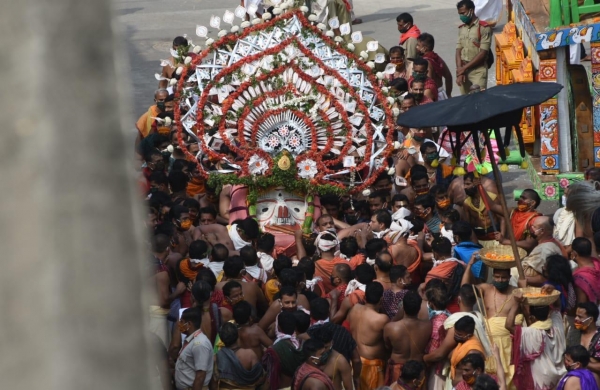 By PTI
KOLKATA: Much like last year, the traditional gaiety on Rath Yatra was missing in Bengal on Monday as authorities at the much-revered Mahesh temple in Hooghly district cancelled all festivities in the wake of COVID-related restrictions, and ISKCON temples in the city and Mayapur marked the occasion with muted celebrations.

At the Kolkata temple of International Society for Krishna Consciousness (ISKCON), which had to put off its 50th year celebrations amid the pandemic-induced curbs, Lord Jagannath travelled in a decorated carcade, along with his divine siblings, as part of the rituals.

No chariot was taken out on the streets, in a departure from tradition.

The cavalcade travelled a distance of three kilometres – from Alfred Road premises to the organisation’s office on Gurusaday Road.

In Mayapur, the global headquarters of ISKCON, a makeshift Gundicha temple was set up on the courtyard, where the three deities — Sri Jagannath, Baladev and Subhadra Devi — will be putting up for nine days.

Only 50 servitors and devotees were allowed to pull a chariot in the temple complex during the day.

Similarly, temple authorities in Mahesh performed all rituals, with just a handful of locals visiting the shrine to offer obeisance.

Smaller chariots rolled out on the premises of the temple to mark the journey of the deities to their aunt’s place at Gundicha temple.

In accordance with the custom, the ‘narayan shila’ (sacred stone) at the shrine was taken to another temple, which represented the aunt’s house, around a kilometre away.

Under normal circumstances, the temple, which had been celebrating Rath Yatra with fanfare for over six centuries, draws thousands of devotees every year.

Early in the day, Chief Minister Mamata Banerjee sent offerings to the deities at ISKCON temple here on the occasion, official sources said.

Taking to Twitter, she wrote, “Warm wishes to all on the auspicious occasion of #RathYatra! I pray to Lord Jagannath for the safety and well-being of all my brothers & sisters.Jai Jagannath.”