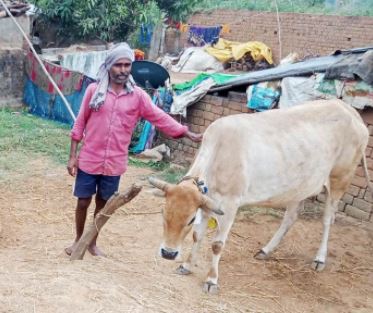 Chhattisgarh government’s ambitious ‘Godan Nyaya Yojana’ is proving to be helpful in strengthening the rural economy. If someone is applying the money received from selling cow dung in his farming, then one is engaged in strengthening the milk business by purchasing livestock from him. Ramnath Typicalwar, a landless farmer of village Anwari of Charama development block, has also purchased 02 improved breed cows and heifer from the 27 thousand rupees he got from selling cow dung, so that he will further the milk business. Ramnath said that he had a native breed cow, which was artificially inseminated and produced calves of advanced breed that grew up to become cows, which led him to start a milk business which was the only means of living for his family. On the sale of milk on Ramnath typical year, the net income of about 4 to 5 thousand rupees in a month. He said that he currently has 19 livestock of advanced breed, whose cow dung earned an income of 27 thousand rupees by selling it in the Gowthan of Anwari, from which he bought a cow and heifer of Shahiwal breed. It is worth noting that in Kanker district, income of Rs 01 crore 30 lakh 66 thousand has been obtained by selling cow dung by 04 thousand 497 cattlemen, who are engaged in building their lives.