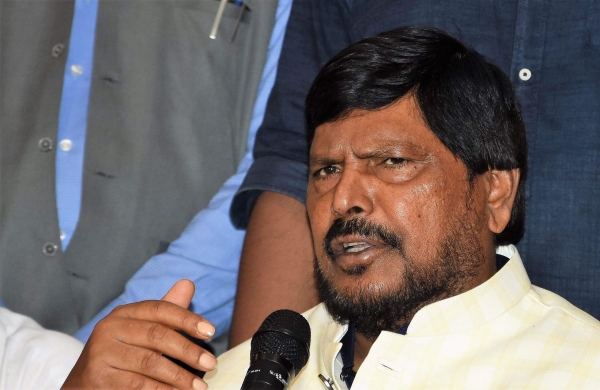 Athawale said, “I will write a letter to Union Home Minister Amit Shah on Monday to impose President’s rule in Maharashtra. The allegations made by Param Bir Singh should be investigated.”

The union minister also demanded Anil Deshmukh’s resignation and said, “I think Anil Deshmukh has no right to continue in that post. He should resign from his post immediately.”

“Sachin Waze and Shiv Sena’s relationship also came to light. Now Chief Minister Uddhav Thackeray has no right to remain in power. I will write a letter to Minister Amit Shah on Monday that President’s rule should be imposed in Maharashtra as the law and order condition is deteriorating and the government has not been able to function as they were also unable to control coronavirus pandemic in the state,” he added.

However, Anil Deshmukh on Saturday refuted all the allegations made by former Mumbai Police Commissioner Param Bir Singh against him. Deshmukh said the police official made these false allegations to save himself from legal action.

Taking to Twitter, Deshmukh said, “Sachin Waze’s direct links in Antilia Case and Mansukh Hiren Case are coming forward. Param Bir Singh is afraid that its connections will reach up to him. He has made these false allegations to save and protect himself from legal action,”

Anil Deshmukh on Thursday said NIA and Anti-Terrorism Squad (ATS) are investigating Sachin Waze’s case professionally and Param Bir Singh has been transferred as Mumbai Police Commissioner so that investigation can be done without any hindrance.

The top police cop, who was recently transferred, has alleged that Maharashtra Home Minister had asked suspended Mumbai Police officer Sachin Waze to collect Rs 100 crore for him every month.

The officer has made these allegations in a letter written to Maharashtra Chief Minister Uddhav Thackeray.