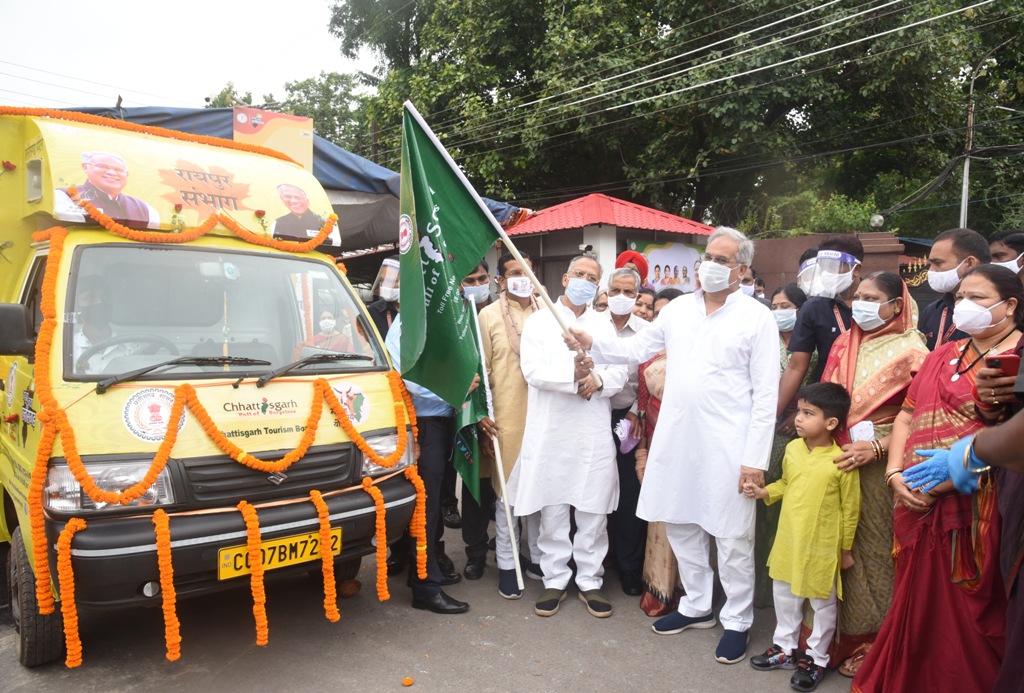 On the auspicious occasion of Teeja-Pora festival today, Chief Minister Mr. Bhupesh Baghel flagged off the special promotion vehicle “Prachar Rath’ for all the five division for publicizing Ram Van Gaman Tourism Circuit, at his Raipur based residence. These vehicles will create awareness about Lord Ram’s visit to places in Chhattisgarh during his exile, with the help LED screens.
These special ‘Prachar Rath’ vehicles will move across the villages, development block, districts or all five divisions, creating awareness about Ram Van Gaman Tourism Circuit with the help of LED exhibition. Chief Minister said that Ram Van Gaman Tourism Circuit Development Fund will be formed to encourage public participation. The fund so collected will also be used for development of Devalaya-Devgudi. On the occasion, Wife of Chief Minister Mrs. Mukteshwari Baghel, Tourism Minister Mr. Tamradhwaj Sahu, Women and Child Development Minister Mrs. Anila Bhendiya, Secretary Tourism Mr. Anbalgan P, Managing Director Chhattisgarh Tourism Board Mrs. Iffat Aara and other public representatives were also present.

It is noteworthy that a concept plan worth Rs 137 crore has been prepared by the Tourism Department for development of Ram Van Gaman tourism circuit. A total of 75 places have been identified under this circuit. In the first phase, 9 sites Sitamarhi-Harchauka (Korea), Ramgarh (Sarguja), Shivrinarayan (Janjgir-Champa), Turturiya (Balodabazar), Chandkuri (Raipur), Rajim (Gariaband), Sihawa-Saptarishi Ashram (Dhamtari), Jagdalpur (Bastar) ), Ramaram (Sukma) have been included. The project has started from Chandkuri near Raipur. Chandkuri is the ‘nanihaal’ of Lord Rama, where  the ancient temple of Mata Kaushalya is located. This temple dates back to seventh century. Action plan worth Rs 15 crore 45 lakh work plan is being implemented for beautification and development of Mata Kaushalya temple premise.
About 2260 km of roads will be built under the Ram Van Gaman tourism circuit. Plantation work has been done on both sides of about 1400 km of roads. All the 9 locations selected in the first phase on the Ram Van Gamaan Path will have an attractive landscape. Development of civic amenities for tourists at all these places is the top-priority. Magnificent entrance gates will be built at all these places, depicting the glory of Lord Ram in form of art and sculpture.