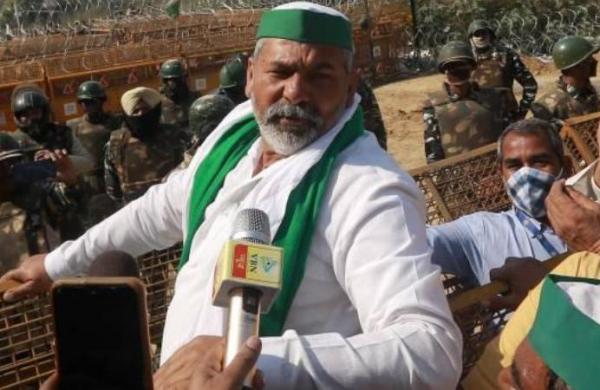 Addressing a well-attended ‘Kisan Mahapanchayat’ at Gumthala Garhu village in Pehowa in this district, a third within a week in Haryana, he said the government should not be under the wrong impression that the protesting farmers will return to their homes without their demands being accepted.

Without naming the Prime Minister or using his ‘Andolan-jivi’ phrase, Tikait said, “In Parliament, they are saying these are parjivis (parasites). Was Bhagat Singh who sacrificed his life for this nation a parjivi? What about 150 farmers who died during this agitation? Were they parjivis too? Had they gone to Delhi to agitate and die?”

Speaking in Rajya Sabha on Monday, the prime minister had hit out at those behind the farmers’ protests, saying a new “breed” of agitators called “Andolan jivi” has emerged in the country who cannot live without an agitation and the nation should guard against them.

Kurukshetra is a land of ‘kranti’ (revolution) and ‘nyay’ (justice) and that is why the ‘mahapanchayat’ is being held here to get justice for the farmers, he said.

Tikait also alleged that attempts were being made to divide the protesting farmers on the lines of region and other considerations, and appealed them to reject any such design.

“They will try to divide you on Punjab-Haryana lines, as Sikh and non-Sikh, Hindus and Muslims..,” he alleged.

“The farmers’ agitation against the Centre’s farm laws is nationwide and not limited to Punjab or Haryana.”

“We will win this fight,” he declared.

Projecting the 40 farmers unions spearheading the agitation as fully united, he said, “We have said we will neither change ‘Panch’ (leader) nor ‘Manch’ (stage).”

“We have always said that if government has to talk there are 40 representatives they can talk to them, whatever these unions decide will be acceptable to us,” he said.

Tikait said the protesting farmers will divide their time between home, fields and the agitation.

Every farmer’s family, he said, is required to participate in the stir by sending at least one person at the Delhi border protest sites while other members would continue to work in their fields.

He said the protesters are prepared for a long struggle to get the three laws repealed and would visit other states like Maharashtra, West Bengal, Karnataka and Odisha to garner farmers’ support for their struggle.

He said that a farmer does not transfer his agriculture land to even his son during his lifetime, how he can give it to the corporates.

The BKU leader from Uttar Pradesh has been camping at Ghazipur on the Delhi-UP border as part of a campaign by farmer unions against the central laws enacted in September.

“Over the past two days, they have brought this new issue of small farmers, saying this (agitation) is not fight of small farmers but that of big farmers who are coming in tractors,” he said, attacking the Centre.

He appealed to the farmers to not be misled by such things.

He claimed farmers have come under debt “due to wrong policies of the government”.

He reiterated that the protesters demanding the rollback of the contentious agri-marketing laws will stay on Delhi’s borders till October 2 and there will not be any compromise on the demands.

“Those occupying the seats of power, their purpose is something else…We don’t have to fall in their trap. We have to concentrate on our agitation. No business over hunger will not be allowed in this country,” he said.

Rejecting the Centre’s assertions that farm laws were in the interests of farmers, Tikait claimed these legislations will adversely impact not just farmers but other sections too.

Tikait also said while salaries of MPs, MLAs have increased by up to 500 percent over the years, rates of farmers crops have gone up by only 19-23 percent.

Meanwhile, singer Rupinder Handa, who was also present at the event, announced to return the ‘Lok Gayika Puraskar’ award given to her by the Haryana government four years ago to protest alleged apathetic attitude of the ruling dispensation towards farmers’ demands.

“Internet was suspended, farmers are not being supported. The government which did not respect farmers, I thought there is no point in keeping this award,” Handa told reporters later.

Thousands of farmers have been protesting against the three farm sector reform laws enacted by the Centre in September last year.

The Centre has been saying these laws will bring in new farming technologies and free the farmers from the clutches of middlemen.

The farmers have been rejecting these claims, saying these laws will harm their interest.