Rajya Sabha adjourned for the day amid Opposition ruckus; Naidu calls for orderly discussions in House 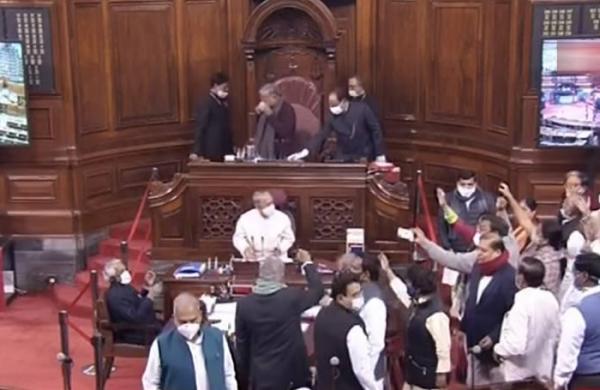 By PTI
NEW DELHI: Rajya Sabha was adjourned for the day on Tuesday without transacting substantial business as Congress and other opposition members created an uproar demanding discussion on the issue of farmers’ protest over the three new farm bills.

When the House re-assembled at 12:30 pm, protesting members again trooped in the Well raising slogans, forcing Deputy Chairman Harivansh to adjourn proceedings for the day.

Before adjourning the House, the Deputy Chairman appealed to members to return to their seats and follow COVID-19 protocols.

However, they did not heed to his requests.

Four bills were listed for consideration and passing in the legislative business for the day.

They were: The Major Port Authorities Bill, 2020; The National Institutes of Food Technology, Entrepreneurship and Management Bill, 2019; The Medical Termination of Pregnancy (Amendment) Bill, 2020; and The National Commission for Allied and Healthcare Professions Bill, 2020.

Earlier in the day, Congress, Left, TMC, DMK and RJD members first walked out from Rajya Sabha after their demand for suspension of business of the day for taking up the discussion was rejected by the Chair.

As the sloganeering continued, Naidu asked the opposition members to return to their seats.

“Please go to your seats and allow the House to function. Some of you said the last time that not having question hour is ‘murder of democracy’. This is a statement made outside,” he said.

“Members who have walked out and again coming to the Well is not fair,” Naidu said before adjourning the House for the first time.

When the House met at 10:30 am, the sloganeering continued and the Deputy Chairman, who was in the Chair, tried to persuade members to allow the House to function.

However, as the opposition members did not yield, he adjourned the proceedings till 11:30 am.

At the time of adjournment, ports, shipping and waterways minister Mansukh Mandaviya was speaking on The Major Port Authorities Bill, 2020.

“Question Hour is going on. Whether they (protesting members) want Question Hour or not, let them place it on record,” he said, as opposition members were raising slogans.

Opposition parties including the Congress, Left, TMC and DMK had given a notice under rule 267 that calls for setting aside of business of the day to take up a discussion on the issue pressed.

Chairman Naidu had, however, disallowed the motion saying the members were free to raise the issue during the discussion on Motion of Thanks to the President’s address.

When the House met for the day, Naidu said he has received notice under rule 267 from various members but the issue can be raised during the discussion on Motion of Thanks to the President’s address to the joint sitting of both houses of Parliament.

The President, he said, had referred to the farmer’s agitation in his address made at the start of the Budget session of Parliament last week.

While Lok Sabha is scheduled to start a discussion on the motion on Tuesday, Rajya Sabha will do so on Wednesday.

“As we are going to start a discussion on Motion of Thanks to President’s Address tomorrow, members can participate and raise their concerns,” he said rejecting the 267 notice.

He said several rounds of discussions have happened between the government and the farmers’ group.

“I understand the concern (of members) for the need to resolve the issue at the earliest date,” he said.

ALSO READ | Farmers stir: Fourth mahapanchayat in UP calls on protestors to relocate to Ghazipur border

“I understand the concern (of members) for the need to resolve the issue at the earliest date,” he said.

Leader of the Opposition and senior Congress leader Ghulam Nabi Azad said the farmers have been camping for more than two months and the issue needs to be discussed.

Sukhendu Sekhar Roy (TMC) said the House is not aware of what is going on between the government and farmers and the House should discuss the issue separately from the Motion of Thanks.

“We want a discussion on a specific issue,” he said.

While CPI leader Elamaram Kareem said water and electricity supply to the protests sites has been cut, DMK’s Tiruchi Siva said farmers have been sitting on roads for over two months in the cold and the issue needs to be discussed separately.

However, Naidu did not agree to their motion after which the members of Congress, Left, TMC, DMK and RJD staged a walkout.

“No one is stopping you from discussing the issue tomorrow. Tomorrow you will get an opportunity,” he said.

Naidu also asked MPs to follow rules, maintain discipline and dignity while discussing issues of national and public importance in the House.

“Last time some unfortunate incidents happened,” he said without going into the details.

In September last year, opposition MPs tore the rule book, climbed on the podium and created a ruckus during the passage of three farm sector reform bills.

“It is binding on all of us to see that the House functions properly, members follow rules and regulations, maintain discipline and dignity and also participate in debates in a meaningful manner,” Naidu said.

“I have all along been appealing to members to prevent any such situation which will affect the interest of Parliament and also the nation,” he said.

On the first full-day functioning of the House in the current Budget session which started on Friday, Naidu said the nation has completed 100 years of representative democracy.

The first direct elections to the imperial and provincial legislative councils were held during the winter of 1920.

“Democracy is all about the participation of people in the management of public affairs and policy-making through their elected representatives,” he said.

“The occasion of being a 100-year-old modern representative democracy calls for serious reflection on the state of democracy and the functioning of legislatures in our country, he said.

On this occasion, the House should resolve to enhance the dignity through “disruption-free proceedings as per rules and conventions,” Naidu said.

Over 20 hours have been allocated for discussion on the Motion of Thanks to the President for his address to members of both houses and the General Budget for 2021-2022, offering ample opportunities to raise and discuss a wide range of issues of public concern to which the Government will respond, he said and referred to discussions he had with leaders of all parties on Sunday.

“I sincerely hope that this important Budget session will turn out to be highly productive in the spirit of the last four sessions,” he said.

“I once again reiterate the importance of this Budget session and the need to ensure the smooth and effective functioning of the august House,” he added.

Referring to work between two sessions of Parliament, Naidu said eight department-related Parliamentary Standing Committees of Rajya Sabha worked overtime and held a total of 55 meetings during the inter-session period.

“These committees met for a total duration of 110 hours and 4 minutes which comes to an average duration of 2 hours and 7 minutes. This is an improvement over the previous average of 1 hour 54 minutes per each meeting,” he said.

The committee on Commerce has reported substantial improvement in holding 10 meetings during the inter-session period for a total duration of 26 hours 18 minutes.

The committee on Transport, Tourism and Culture held the highest number of 11 meetings for a total period of over 22 hours.

The committee on Education, Women, Child, Youth and Sports reported the highest average attendance of 53.45 per cent in 7 meetings.

Six committees of Rajya Sabha, during the inter-session period, spent 38 hours and 34 minutes discussing various aspects of the outbreak of the pandemic, its consequences and management.

“These committees of Rajya Sabha have examined the pandemic related issues in a bipartisan and constructive manner and not as fault finding so as to provide guidance for such sudden challenges in future.

“These committees have also complimented the governments, the people and all other stakeholders for rising to the occasion in handling the pandemic challenge,” he said.

Noting that the change between the same time last year and now is perceptible, he said India has moved from being a nation with few testing facilities, quality masks and personal protection equipment to one that “successfully contained” the pandemic and has emerged as the hope for other countries with indigenously made vaccines and as the vaccine factory for the world.

“This is a remarkable transformation. This House places on record its appreciation of the people and all others concerned for the same,” he added.