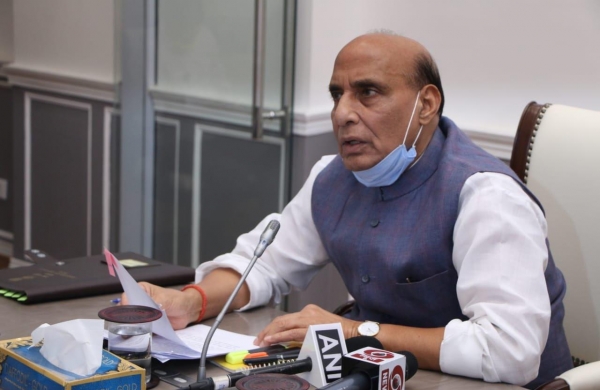 By PTI
PANAJI: If required Union minister Shripad Naik, admitted to a hospital in Goa after he met with an accident, will be shifted to New Delhi for further treatment, Defence Minister Rajnath Singh said on Tuesday.

A team of New Delhi’s All India institute of Medical Sciences (AIIMS) will coordinate with doctors of the Goa Medical College and Hospital (GMCH) who are treating the 68- year-old BJP leader, he said.

Singh said the condition of Naik is stable and he is out of danger.

Naik received injuries, while his wife Vijaya and an aide died on Monday when their car met with the accident near Ankola in Uttar Kannada district, while he was returning to home state Goa from Dharmasthala in neighbouring Karnataka.

Singh flew down to Goa and visited Naik, who was admitted to the state government-run GMCH near here on late Monday night.

Upon his arrival, Singh held a meeting with senior doctors of the GMCH, including its Dean Dr Shivanand Bandekar, over the condition of the Union Minister of State for Defence and AYUSH who underwent multiple surgeries at the hospital.

Talking to reporters, Singh said he has spoken to AIIMS Director Dr Randeep Guleria, who has agreed to coordinate with the team of GMCH doctors treating Naik.

The condition of Naik is stable and he is out of danger.

Teams of doctors from the AIIMS and the GMCH will supervise his treatment, and if required, he would be flown to New Delhi for further treatment, Singh said.

We may not require to shift him to Delhi,” he said.

Dr Bandekar said as of now there was no need to shift Naik out of the GMCH.

When he was brought to the GMCH, he was critical but later he responded to treatment and is gaining consciousness.

Throughout night four major surgeries were performed on him, he said.

Bandekar said Naik will continue to be in the hospital for another 10 to 15 days after which it will take at least 3 to 4 months for him to recuperate completely.