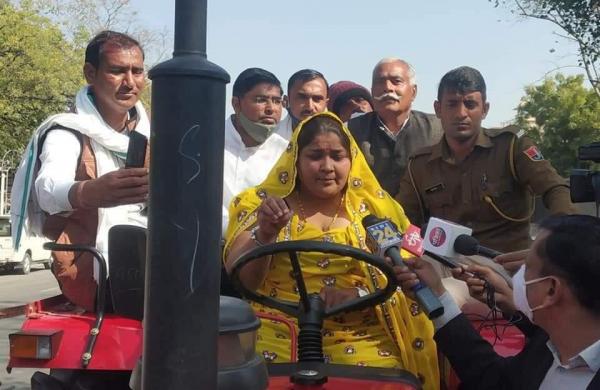 By Express News Service
JAIPUR: Congress MLA from Bamawas Indira Meena on Wednesday reached the Rajasthan Assembly here on a tractor on the first day of the budget session to extend her support to the farmers protesting against the new farm laws.

“I am in support of the farmers agitating against the farm law. I am there for them whenever they will need me,” Meena told reporters outside the state Assembly.

Later, the session began with uproars as echoes of the peasant movement were dominant even inside the House. During the Governor’s address, CPI MLA Balwan Poonia shouted slogans in support of the farmers’ movement in the house. He threw the papers before the governor and termed the central farm Acts ‘black law’ which would ruin farmers. He demanded the central government repeal them.

Poonia, who represents the Bhadra constituency, even interrupted the governor while the latter was addressing the Assembly and asked him to “say something”. “I am speaking, brother”, Governor Kalraj Mishra responded to Poonia. Poonia and a few other MLAs then sat on a dharna in the House.

Later, state Minister Shanti Dhariwal, Chief Whip Mahesh Joshi, and Deputy Whip Mahendra Chaudhary tried to convince Poonia who eventually was taken out of the House after a prolonged altercation. The Governor’s address, however, continued amidst the din and dharna in the Well.

In sharp contrast, slogans of ‘Jai Shri Ram’ were raised by a group of BJP MLAs inside the House. Overall, the first day of the Rajasthan Assembly indicated that heated debates over the contentious farm bills are bound to dominate the Budget Session.

In addition, it was announced that CM Ashok Gehlot will present the state budget on 24 February.