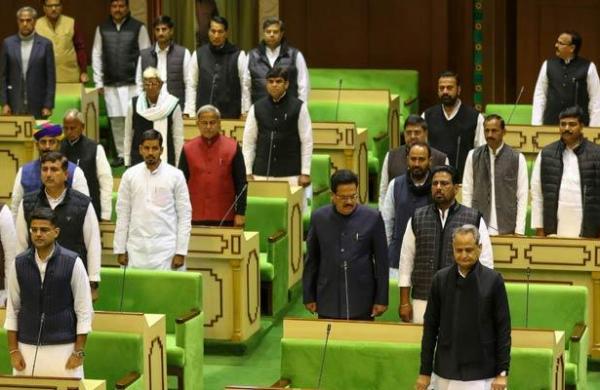 By PTI
JAIPUR: The Rajasthan legislative assembly passed the state budget by a voice vote on Thursday with Chief Minister Ashok Gehlot announcing to implement ‘CM Chiranjeevi Yojna’ from May 1 in the state under which every family in the state will get medical insurance benefit of up to Rs 5 lakh.

The chief minister said the MLA development fund has been increased from Rs 2. 25 crore to Rs 5 crore annually while announcing a slew of new development projects in almost all sectors.

Gehlot also criticised the previous BJP government in the state for its policies and “financial indiscipline” due to which revenue and fiscal parameters were “stretched beyond the permissible limits”.

Replying on the Finance Bill and Appropriation Bill-2021, Gehlot expressed concern over the centre reducing the funds given to the state.

“The situation that has risen, I am worried. We talk about cooperative federalism but it has not seen in the prime minister’s behaviour. He only talks about it,” Gehlot said.

The Congress leader urged the opposition to support the state government in taking up the project of Eastern Rajasthan Canal Project (ERCP) and stalled railway route projects with the centre.

“I am ready to fight for ERCP just like the refinery project in Barmer. We have given 25 MPs in parliament. We all should work together,” Gehlot said.

Referring to the speech of Leader of Opposition Gulab Chand Kataria regarding the implementation of the budget announcements, Gehlot said he does not have to worry about it, government will fulfill the budget promises.

Gehlot rubbished claims of the opposition that his government failed to provide employment, saying more than 1.70 lakh new jobs were generated in the last two-and-a-half years.

He said, ”We have given 97,000 jobs till now. Examination results have been released for 17,000 jobs. Advertisements have been issued for 37,000 recruits while the process of issuing advertisements for 23,000 recruits is underway. Our government has created more than 1.70 lakh jobs in the last two and a half years.”

For the appointment of subject matter experts, a provision of lateral entry for the identified posts of mines, medicine, university etc. is proposed so that the state can get the benefit of experienced candidates, he said.

The chief minister reiterated that there is no difference between the Minas and the Meenas in Rajasthan and claimed that the issue is “raised again and again” to create confusion.

I would like to clarify in the house that Mina and Meena are same and the only difference is of spelling.

Gehlot said, “By simplifying the eligibility for Economically Weaker Section (EWS) reservation in the state, the income limit was raised to Rs 8 lakh per annum and the property-based conditions were removed.

Now, I also announce the relaxation in the age limit and fees in the EWS reservation similar to other classes.”

Following the chief minister’s reply, the house passed the Appropriation Bill, 2021 and the Finance Bill, 2021 by a voice vote.