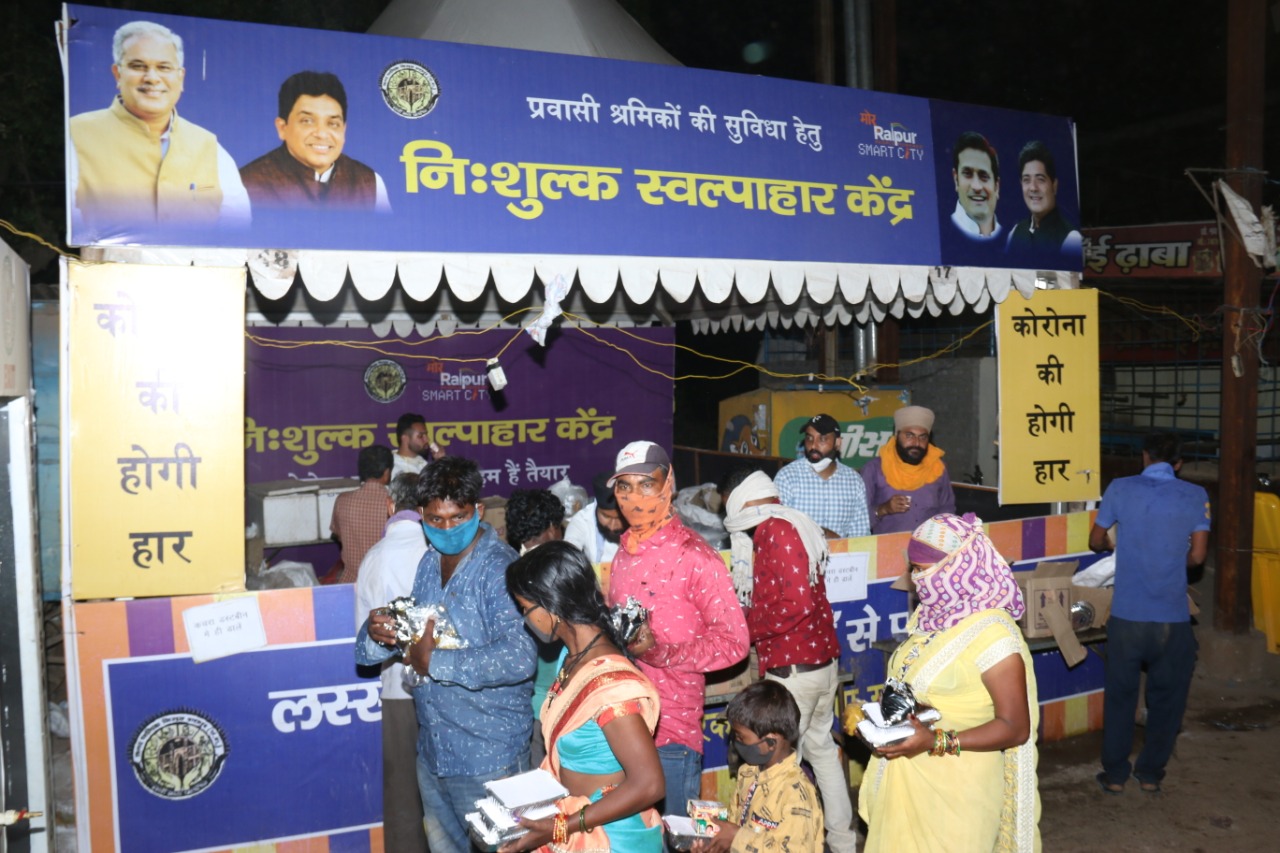 Raipur, On the instructions of Chief Minister Shri Bhupesh Baghel, the Government of Chhattisgarh has ensured free arrangement of food, health tests and transportation of migrant laborers of all states who are passing through Chhattisgarh state. Raipur’s self-help, social service organizations are also actively participating in this campaign of the state government. The migrant laborers of the states of Bihar, Jharkhand, Odisha and West Bengal, Uttar Pradesh, etc., working in different districts of Maharashtra, Madhya Pradesh, Andhra Pradesh, Telangana, are reaching thousands of different ways daily in Tatiband of Raipur. The state government has taken the responsibility of making the workers of these states to reach the state’s limits safely. Arrangements have also been made to send laborers from Chhattisgarh coming from other states to their home district.

A stall has been set up at the Tatibandh by the Health Department to investigate the health of migrant workers. Food, nasta and drinking water have been provided free of cost to the workers under the banner of Smart City on behalf of District Administration Raipur. Many volunteers, activists of social organizations are also engaged in helping the migrant workers. The Tatibandh Gurudwara Management Committee is also engaged in this sacred work. Food for migrant workers has been arranged by the Gurudwara Management Committee. Activists of several organizations including Samarth Charitable Trust, The People and Nookd the Cafe, Mother’s Care Women’s and Children’s Welfare Society are also serving migrant workers. A large number of buses have been arranged by the administration with the help of the Transport Union to send the laborers arriving in Tatibandh to their state and home district, which is continuously transporting the workers to the border of their home district and states. The workers who reached Raipur by traveling in trucks from Pune, Hyderabad appreciated the arrangement of free food made by the Chhattisgarh government and social organizations in Tatibandh and said that after two to three days of annoying journey in two phases, Raipur He is relieved after reaching. Seeing the system here, the fear of the mind has disappeared. Workers say that now the worry of reaching their village and home state is almost gone. Anand Gop and Kate Kumbhakara, hailing from village Aasura in West Singhbhum district of Jharkhand state, said that they along with 5 other colleagues from their village used to build an angle of tower line in Nagpur, Maharashtra. Due to the lockdown, Baganadi reached the border today with a lift in the truck. Raipur Tatibandh has arrived by bus from there. He said that the bus was also arranged by the Chhattisgarh government to bring Raipur from Bagh river. Chhattisgarh government has also arranged for Bans to go from Raipur to Jharkhand. The government has also managed to take workers from Tatibandh to Garhwa in Jharkhand.