Raipur: Ramgarh is a symbol of archaeological and cultural dignity of Chhattisgarh: There is evidence of Ramayan period. 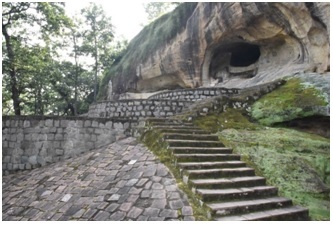 Srishti creator has awarded Chhattisgarh with unique natural beauty. This region of Dakshin Kaushal has been a hallmark of Ramayana culture. This place of historical, archaeological and cultural importance is known as the hill of Ramgarh. The site is located near the Udaipur development block, about 50 kilometers from the district headquarters, Ambikapur. Its height is about 3 thousand 202 feet above sea level.
Mahapavi Kalidas’s unique work “Meghdootam” composed the site and known as the world’s oldest rock theater, “Ramgarh” on the first day of Ashadh every year to preserve and promote this historic heritage in the shadow of the mountain. Ramgarh festival has been organized here. The caves of “Sitabengra” and “Jogimara” located on the lower summit of Ramgarh mountain are the most important as the oldest rock theater. These caves are believed to date back to the Mauryan period in the 3rd century BC. There is evidence of inscriptions in the Mauryan period Brahmi script in Jogimara cave and in the Gupta period Brahmi script in Sitabengra cave. Another feature of Jogimara Cave is that the most ancient specimens of Indian murals are inscribed here.
Statues, inscriptions and copper sheets are considered of great importance as archaeological documents. Items of such importance are available in Ramgarh. There are about 8 statues stored in Jogimara Cave. These sculptures are about 2 thousand years old.
There are two inscriptions in the vertical part of the Ramgarh hill. The script of this article, written with a chisel cut on the stone, resembles Pali and some Kharoshthi. Script experts have considered it a unanimous shift script. The lotus design built on it seems mysterious. This shape feels less invoice more.
Maheshpur Vanasthali near Ramgarh was the Maharishi’s taphbhoomi. Ramgarh is considered to be the creation of Meghdootam, the immortality of Mahakavi Kalidas. About 10 feet up “Kalidasam” is inscribed on this site itself.
Lateral to Sitabengra is a smooth tunnel route called the Elephant Pol. Its length is about 180 feet. Its entrance is about 55 feet high. A stream flows from this side to the other side. Elephants can easily move in this tunnel. Hence it is called Hathi Pol. Within the tunnel, a cold water reservoir has formed due to leaks from the mountain and other geographical effects. This is the Sita Kunda, which is described by the poet Kalidas in the first verse of Meghdoot, “Yakshashkre Janakatanya Snan Punyodakeshu”. The water in this pool is very pure and cold.
Kalidasa Yugin Natyasala and inscriptions, natural images of Meghdootam, signs of Valmiki Ramayana and Tumvuru chronicle described as the base story of Meghdoot and Ramgarh, the Vanpath line of Sri Rama are being considered. It is believed that Lord Rama spent some time of his exile in Ramgarh. The cave in which Sitaji took shelter during the exile of Lord Rama became famous as “Sitabengra”. These caves are a pilgrimage site for art lovers in the form of theater. This cave is 44.5 feet long and 15 feet wide.
There is another cave next to Sitabengra, called Jogimara Cave. The length of this cave is 15 feet, width 12 feet and height 9 feet. Its inner walls are plastered with very smooth thunderbolt. There are attractive colorful paintings on the roof of the cave. These paintings have toran, letter-flower, animal-bird, male-god-demon, warrior and elephant etc. In the center of the painting around this cave are pictures of five young women, who are sitting. In this cave some lines are engraved in Brahmi script.
Surguja holds a historical significance due to its past glory and archeological remains. Tourists visiting here feel the Ramayana era.