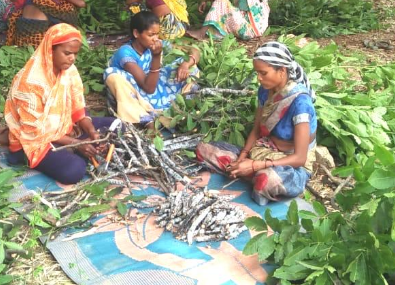 Mahatma Gandhi National Rural Employment Guarantee Scheme is continuously changing the villages. The scheme has not only provided work to the people, but has opened many avenues for economic development for them. A hallmark of this is seen in the dependent village of Banauli in Bauskund, the gram panchayat of Bhanupratappur development block in Kanker district, where women of self-help groups are now producing lakhs of millions.

Continuous efforts are being made to increase the means of livelihood and save natural resources by promoting lac cultivation among the villagers in the Vananchal areas through the District Panchayat. In the same sequence, Sumitra Kuretti, president of Radha Self-Help Group from MNREGA to Bihan, was given to plant 4 thousand semi-saplings in 2 acres of land. From the plant of semiautonomy, the group produced income of Rs. 35 thousand lakhs for the first time. Under the guidance and direction of Dr. Sanjay Kannauje, CEO of the District Panchayat, the women of the group were imparted training from Krishi Vigyan Kendra Kanker and they were provided drip facility through bank linkage through Bihan. After this, in the second year, the women of Radha self-help group received cash income of one lakh 74 thousand rupees from the cultivation of lac in 4 thousand seedlings. The women of the group produced 02 quintals of lac in the first year, In the second year, by producing 06 quintals of the same seed from the same seed, earning Rs 01 lakh 74 thousand 150.