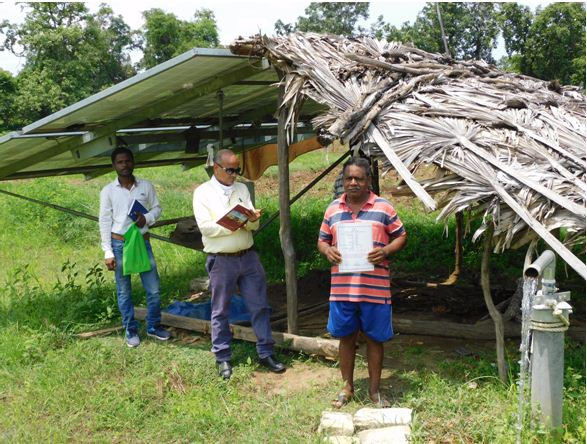 The Chhattisgarh government is benefiting by providing forest rights letters to the eligible beneficiaries occupying forest land. Ratiram’s luck shone as Sukma district’s ancestors got the right to farm land for years. Rama Ram, a farmer in Ramaram village, about 11 km from the district headquarters, rejoiced the family after getting ownership of the land in which he had been cultivating paddy for years. Ratiram’s family had been cultivating paddy in this two and a half acre land for years, but there was no concern about this land due to no documents.

In the year 2016, Mr. Ratiram Maurya got the right to his possession of 2.5 acres of forest land, then not only his worries were removed, but he started 12 months of farming by putting solar pumps in this land under the Solar Sujala scheme. He told that paddy was cultivated on this land by his forefathers, from which only the grain was provided to maintain the family. Today, after getting the ownership of the land, they are moving towards economic prosperity by taking many crops besides paddy.

Paddy crops are harvested during the rainy season, producing about 50 quintals of grain per year, earning about 75 thousand rupees by selling paddy through the cooperative society. This year, along with paddy crop, he has also planted maize, liquor and urad crops and is expecting a good income. At the same time, during the summer, Ratiram has earned about 30 thousand from the crops of ladyfingers, tomatoes and green vegetables. A year after getting forest rights in the year 2016, the government has also provided 3HP tube wells for solar energy through the solar panel and agriculture department for irrigation in the field, which has helped them a lot in irrigation of their crops. .

He said that there has been a change in life with the receipt of the Forest Charter, now everyone is relaxed and cultivates their land. Other schemes of the government have also provided relief. Ratiram said that the economic condition of his home has been improved by acquiring possession of forest land for years and now living a happy life with his son, daughter-in-law and three grandchildren.