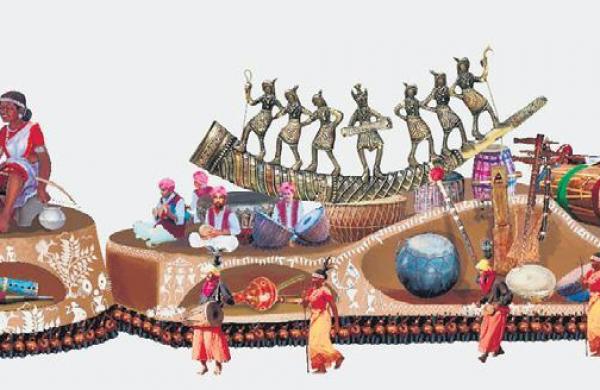 Express News Service
State’s tableaux on folk music selected for R-Day The splendor and sonorous tone of Chhattisgarh folk music will resonate on the Janpath this Republic Day as the Defence Ministry has selected its tableaux for the marquee event. Chhattisgarh was vying for a spot against 27 states eight union territories. A special committee of the ministry scrutinised the state’s offering during a gruelling selection process spanning five rounds. The tableaux depict the folk instruments used in the tribal areas of Bastar in south and Sarguja in the north, along with their ethnic background.

Cops’ table-top calendar highlights achievements  Riding on the success of their three-pronged Vishwas-Vikas-Suraksha initiative, the Bastar police are taking their outreach drive a notch higher through table-top calendars. The calendar highlights the various initiatives of the official machinery. Their initiative has led to a 40 per cent decline in Maoist violence, and this figures in the calendar. The captions in the local tribal Gondi/Halbi language about the various community outreach programmes are the main attraction. Counter propaganda and community policing campaigns like Bastar Tha Matta (voice of Bastar) and Lon Varatu (return to your village) are the other salient points.

BJP leadership eyes reclaiming ground lost to Cong  It has been two years since BJP lost power to Congress in the state, but it has not given up. The leadership is out to galvanise the rank and file to prepare it for Mission 2023-Vijay Chhattisgarh, and Mission 2024-Bharat Vijay. BJP general secretary and Chhattisgarh in-charge D Purandeshwari during her recent visit to Raipur and other districts reviewed the party’s strength and performance. The state leadership was asked to prepare a roadmap to strengthen the party base in constituencies where the party could not particularly do well in 2018. “Propagate Centre’s achievements and the state government’s failure among the masses,” she told the cadre.