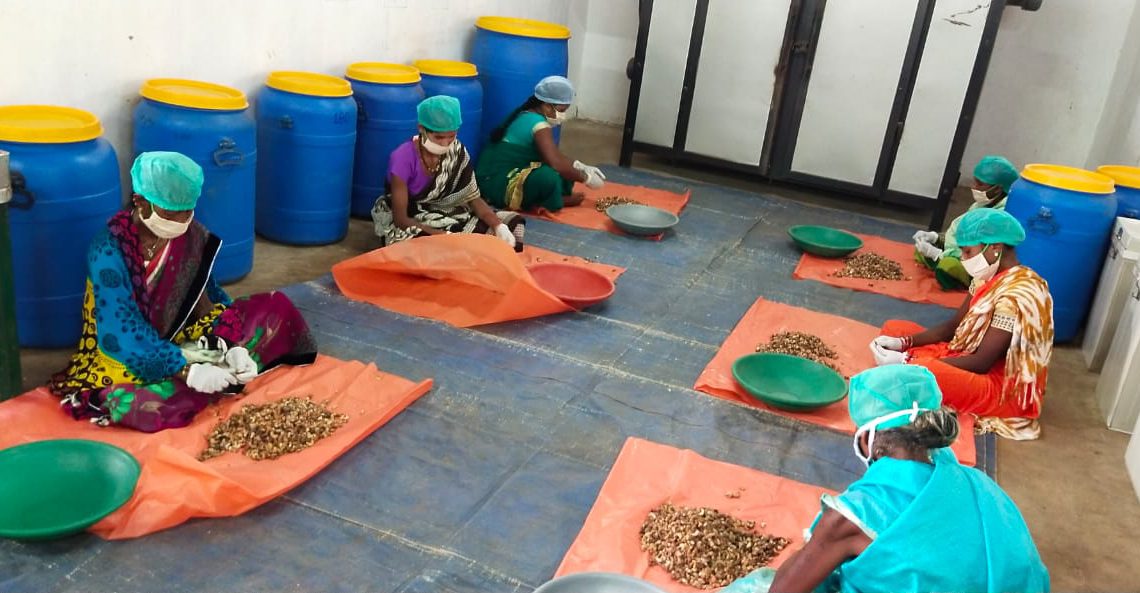 During the crisis period, the income of forest dwellers living in the region has increased. Chief Minister Shri Bhupesh Baghel has recently launched packaging in new form and with Bastar brand name. In view of the demand for delicious cashew nut from Bastar, it has been made available in Sanjivani stores of the forest department. The state government has revived the closed cashew processing where the cashew processing has been resumed while the support price of cashew has been increased due to the campaign to provide employment through forest produce to the people living in Vananchal.

Cashew plants were planted in the seventies in the forest areas of Bastar due to their adaptability to cashew climate. But after the plantation, no mechanism was made for its collection nor attention was paid to processing. Due to which cashew produced in the forests here was mostly sold through middlemen in the nearby Odisha region, due to which the forest dwellers here could not get the proper price of cashew. The collectors used to get a collection rate of 50-60 rupees per kg of cashew and the beneficiaries of this place also had to be deprived of the processing price due to non-availability of processing unit. At present, there is a successful plantation of cashew on about 15 thousand hectares of land in Bastar, which has a production capacity of 10-12 thousand quintals.

The new government formed in the state paid attention to this to provide additional income to the forest dwellers. Cashew processing unit closed at Vandhan Vikas Kendra in Bakavand was restarted. The state government increased the support price of cashew nut to Rs 100 per kg this year, where they got employment in the Corona crisis, while the collection of cashew has increased to 5500 quintal this year. This year, the work of collecting cashew was done by about 6 thousand forest dwellers, due to which an average income of 10 thousand rupees was given to each family. Cashew processing is being done by about 300 women in Van Dhan Vikas Kendra Bakavand. Processing work will provide continuous employment to the women of the area for 8 months. With this, an income of about 60 thousand rupees per family is expected. During the Kovid epidemic, more than 6300 families got employment from cashew forest produce.

Processing is being done in Bastar under the technical guidance of ICAR Directorate of Cashew Research Puttur, Karnataka. Cashew seeds yield about 22 percent cashew after processing. This year about 1200 quintal cashew will be prepared from 5500 quintal cashew collected. The cashew trade prepared by women self-help groups is expected to benefit Rs 30-50 lakh this year. The incentive amount will be distributed to the families involved in the collection and processing of cashew nut, like tendu leaves. Thus now the forest dwellers will get benefit at 3 levels. First, the fair price of cashew seeds, secondly employment to 300 families in processing and thirdly the distribution of 100 percent of the profits received from trade.

Women happy to get employment

The Chairman of the Van Dhan Vikas Kendra Bakavand Self Help Group working in cashew collection and processing work, Smt. Gunmani said that from the processing work, they are getting 3 thousand to three and a half thousand. The quantity of cashew is more this year, so the profit is likely to increase by about 5 thousand to 6 thousand rupees. Smt Hembati, chairman of the collection center level group, says that our committee has received Rs 20 thousand in just 15 days from collection of cashew nuts. Karitgaon Collection Center Level Motivator Smt. Jayamani Baghel said that this year the increase in support price of cashew by the state government to 100 rupees per kg has brought more economic benefit to the women involved in the collection work. Similarly, Rajnagar Samiti Bakavand Smt. Padmani says that the amount received from cashew processing has helped him in running the family. Ration from this amount, Water is arranged. Smt Belabali of the same committee says that his family life has improved due to the amount received from processing work. She is teaching her children well. Smt Machandai, Padma and Navina of the village level collection center say that they have got employment and improved livelihood due to processing work.