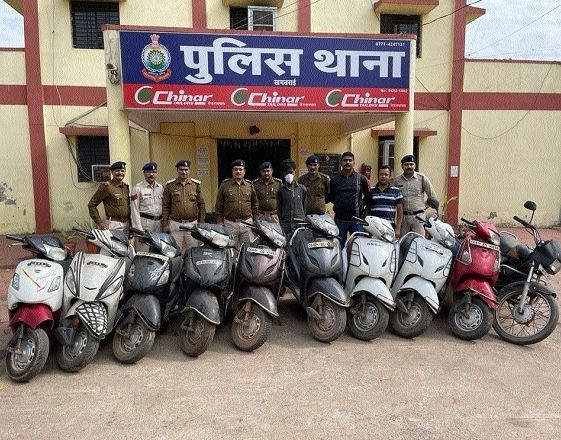 A motorcycle lifter, who was allegedly stealing bikes by using a master key, was arrested in Raipur along with 10 two-wheelers stolen from separate locations in the city. A team from Khamtarai police station entrusted with the task to probe vehicle lifting cases reported in its jurisdiction, on Monday arrested a thief identified as Laxman Barle (21), a resident of Hirapur area under Kabir Nagar police station limits, and recovered 10 two-wheelers from his possession, said police sources. The estimated market value of the seized two-wheelers would be around Rs 7 lakh, said police sources. “During interrogation, the accused admitted to stealing vehicles from separate locations in the city by using a master key. Investigation is underway to find out whether the accused has sold the lifted vehicles to anyone,” said police sources, adding that to meet his need for expensive articles and sedative materials, the accused was stealing motorcycles and selling them at a cheaper rate. Investigation revealed that the arrested accused had spent jail term in connection with bike theft, added police sources. Acting on precise inputs about the thief, a police team swung into action and intercepted Barle. During questioning, Barle admitted of stealing the vehicles,” said police sources. An offence in this connection was registered with Khamtarai police station under relevant Section of Indian Penal Code (IPC).