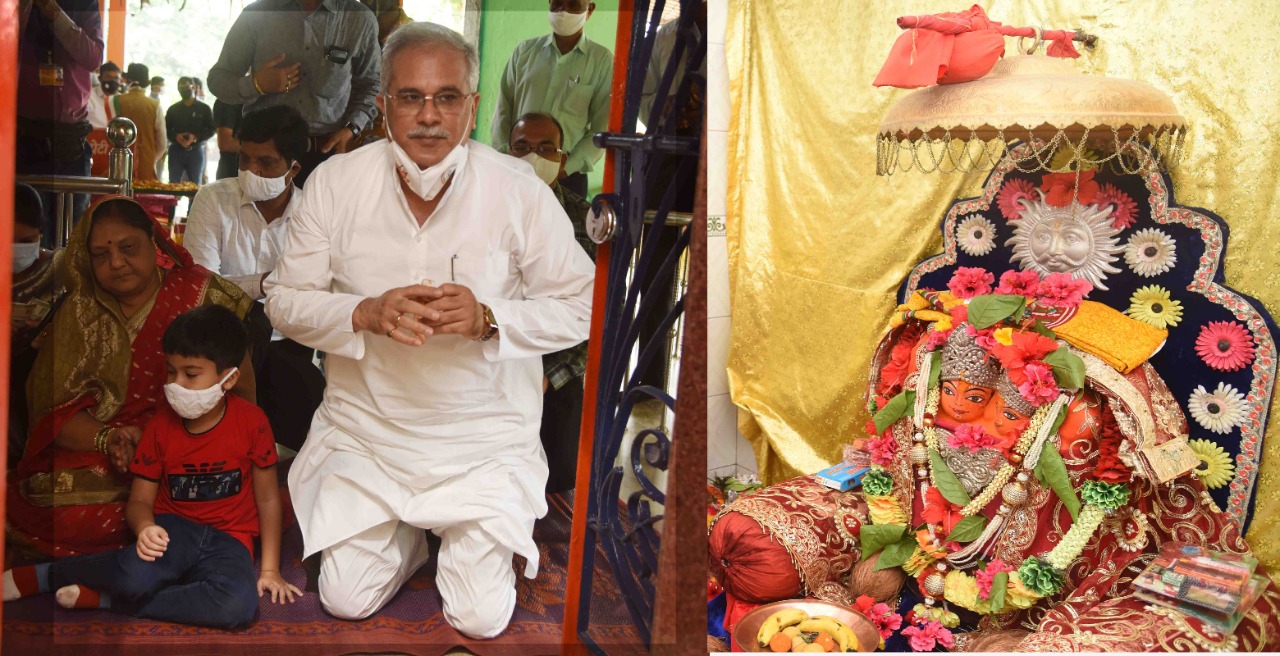 Lord Ram is settled in a particle of Chhattisgarh

Chhattisgarh government has prepared a concept plan of Rs 137.45 crore for the development of 09 sites proposed in the Ram Van Gaman tourism circuit

Drinking water, toilets, electrification, restaurants, access routes will be made for the convenience of tourists

Construction of a grand temple will begin soon in Chandkuri, the birthplace of Mata Kaushalya, near the capital Raipur in Chhattisgarh. Chief Minister Shri Bhupesh Baghel today reached Chandkuri with wife Shrimati Mukteshwari Baghel and family members and prayed at the ancient temple of Mata Kaushalya and wished for the prosperity and prosperity of the state. He took detailed information of the project prepared for the beautification of the temple and the development of the campus. The Chief Minister said that during the beautification of the temple, special care should be taken of the facilities of the pilgrims visiting the temple keeping the original form intact.

It is noteworthy that the Government of Chhattisgarh is developing important places on the Ram Van Gaman Path as a tourist destination. It has been started with the Bhoomi-Poojan on December 22 of the beautification work of Mata Kaushalya’s temple at Chandkuri. The work plan for construction of the grand temple has included electrification, beautification of the pond, ghat construction, parking, development of the parikrama path etc.

Chief Minister Mr. Bhupesh Baghel has said that Chhattisgarh is the goddess of Lord Ram. Here Lord Rama is inhabited in every particle. Lord Rama has spent a lot of exile here. The Government of Chhattisgarh is developing the Van Gamaan route of Lord Rama as a tourism circuit so that these places can gain national and international fame. Baghel said that beautification work will be done at Chandkuri at a cost of Rs 15 crore. On this occasion, he has asked to build a circumambulation path, a well-equipped Dharamshala and toilets along with the strengthening of the bridge passing through the pond here. The Chief Minister said that Bhoomi Pujan of beautification work has been done, construction work will start here from the third week of August.

On the occasion of the Chief Minister, on the demand of the villagers, giving approval for the bypass road near the temple, he directed the necessary action. In view of the convenience of the villagers, the district authorities have been instructed to open a branch of a nationalized bank in Chandkuri. On this occasion, Mr. Baghel planted a vine and a sapling of Mahua on the temple premises. Along with this, plants of Amla, Peepal, Guava and Karanja etc. were also planted in the premises. The Chief Minister planted tree-guards being made from bamboo by the Serikhedi Women’s Group on these planted plants. On this occasion, the Chief Minister discussed with the villagers about the facilities available in the village including Gauthan and Godhan Nyaya Yojana. On this occasion, Urban Administration Minister Dr. Shiv Kumar Dahria, Chairman of District Panchayat Arang, Mr. Khilesh Dewangan,

It is worth mentioning that the ancient name of Tretayugin Chhattisgarh was known as Dakshin Kosala and Dandakaranya. After entering Chhattisgarh from North India, Prabhu Shriram spent four years at various places and entered South India. Prabhu Shriram entered Chhattisgarh from a place called Sitamarhi Harchauka via the Gawai River in Koriya district in Chhattisgarh. During this, he entered South India from Ramaram in Sukma district, visiting 75 sites. Out of the above mentioned places, 51 are such places where Prabhu Shriram stayed and spent some time during the tour. In the first phase, 9 of these sites will be developed. The Chhattisgarh government is working on the development plans of Ram Van Gaman Path, from the point of view of tourism, which aims at bringing tourists,

In Chhattisgarh, 09 sites have been selected in the first phase for the purpose of developing Ram Van Gaman tourism circuit. These sites include Sitamarhi-Harchauka (Korea), Ramgarh (Ambikapur), Shivrinarayan (Janjgir-Champa), Turturiya (Balodabazar), Chandkhuri (Raipur), Rajim (Gariaband), Sihawa-Saptarishi Ashram (Dhamtari), Jagdalpur (Bastar), Ramaram (Sukma) is included. A concept plan has been prepared by the Tourism Department taking the proposed 09 destinations in the Ram Van Gaman tourism circuit, which costs Rs 137.45 crore. For the Ram Van Gaman tourism circuit, the state government has made a provision of Rs 5 crore last year (2019-20) and Rs 10 crore this year (2020-21) in the budget. In this way, the total amount of Rs 15 crore has been approved by the state government.