Raipur: Chief Minister Bhupesh Baghel will unfurl the flag on Independence Day in the capital 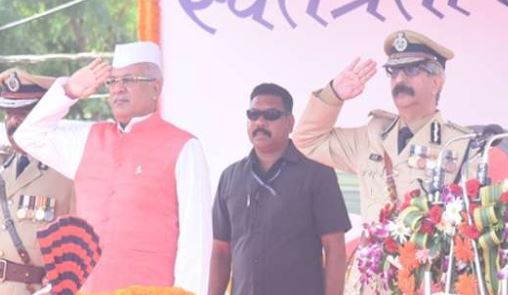 Like every year, Independence Day, August 15 will be celebrated in the state in a dignified manner this year. This year Kovid-19 will be organized with special care keeping in mind the epidemic. The General Administration Department of the state government has issued guidelines regarding the celebration of Independence Day celebrations. Under which instructions have been given by the Government of India, Ministry of Home Affairs and Ministry of Health and Family Welfare to conduct the program, following all the instructions issued by Kovid-19 and ensuring measures.

As per the instructions issued, the state level function of Independence Day will be held at the local police parade ground in the capital Raipur, where the Chief Minister Mr. Bhupesh Baghel will hoist the flag. After the flag hoisting, a salute will be given by contingents of police and paramilitary forces. The Chief Minister will send a message to the public. Corona Warriors will be specially honored by inviting doctors, police personnel, health workers and sanitation workers in the program. It will be mandatory for all the people coming to the program to wear masks and follow social distance etc.

Similarly, flag hoisting will be done by the chief guest at the Independence Day celebrations at the district level. After this, a salute will be given by contingents of police and city soldiers. The message sent by the Chief Minister to the public will be read by the Chief Guest. In the district level program, Corona Warriors doctors, police personnel, health workers and sanitation workers will be specially invited and honored. It will be mandatory for all the people coming to the program to wear masks and follow social distance etc.

Public functions will not be held at Tehsil and District level on the occasion of Independence Day. Flag hoisting will be done in district offices by district presidents and urban bodies by mayors or presidents of urban bodies. The flag will be hoisted by the sarpanch at the panchayat headquarters and by the head of the village in large villages and the national anthem will be sung collectively. As per the guidelines of the General Administration Department, school students will not be collected in any event in the programs organized at the state, district, block and panchayat level. Cultural programs will not be held at the events held. A limited number of distinguished guests will also be invited. Social and personal distance will be particularly adhered to in the meeting arrangement.

The main function to be held at Raipur and other district headquarters of the state capital will start from 9 am. In view of this, flag hoisting of government offices located in Raipur and other district headquarters will be done before 8 am so that officers and employees of those offices can attend the main function of the district. Flag hoisting program will be organized by the office heads of all departments in their office. The national anthem will be sung after this. The national flag will be hoisted at all government and public buildings. Independence Day will be lit at night on August 15 at all government and public buildings and monuments of national importance.