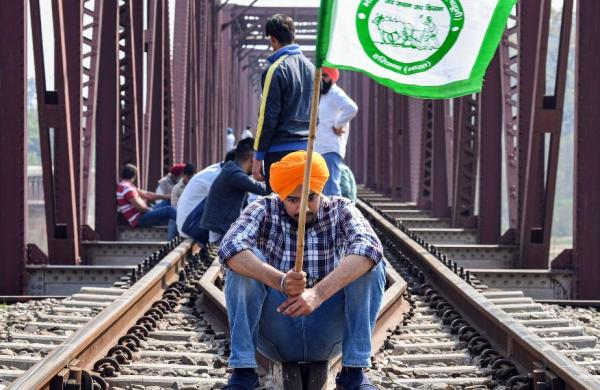 By Express News Service
There was no violence or untoward incident, but the nationwide ‘rail roko’ programme called by the farmer unions in protest against agri laws saw some disruptions in train services in a few states. Services were affected as farmers blocked tracks in Punjab, Haryana, Karnataka and parts of Uttar Pradesh, Maharashtra and West Bengal from 12 noon to 4 pm.

In most other states, the rail roko call received a lukewarm response. While farmer leaders claimed the four-hour stir was peaceful and a big success, the railways claimed it had negligible impact. “A few trains were stopped in some areas but operations are normal now,” a railway spokesperson said. Farmer leaders reiterated the agitation will continue.

“Even if you have to set your standing crop on fire, you should be prepared for it. The government should not be under any misconception that farmers will soon leave the protest sites to harvest crops. If they insist, then we will burn our crops. The government should not think that protest will end in two months. We will harvest our crops as well as protest… There will be no ‘ghar wapsi’ till then,” Bhartiya Kisan Union leader Rakesh Tikait told a mahapanchayat in Hisar.

Tikait advised the farmers to “keep your tractors filled with fuel and facing towards Delhi” saying “you can get a call to move at any time”.

No big impact on train operations