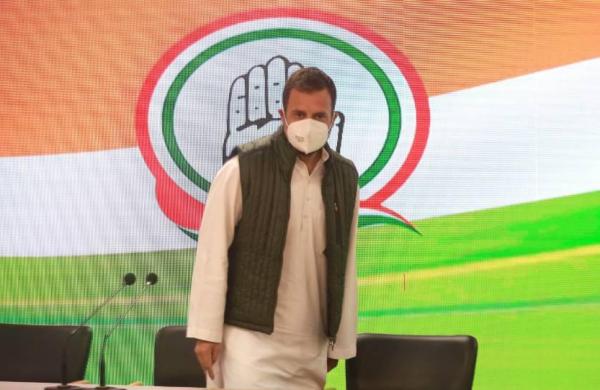 By Express News Service
NEW DELHI:  With many international personalities, including celebrities, lending their support to India’s protesting farmers, the BJP on Wednesday lashed out at “propaganda and fake narratives” and also attacked Congress leader Rahul Gandhi, alleging that he conspires with anti-India elements during his trip abroad.

“We stand together. We stand United against all attempts to malign India through propaganda and fake narratives,” BJP president J P Nadda tweeted as a storm brew over the issue.

At a press conference, BJP spokesperson Sambit Patra hit out at Gandhi over his attack on the government over the farmers’ issue.

“He goes abroad to hatch conspiracy with anti-India elements as to how to defame India and drag the country into controversies,” he alleged.

Be it Rihanna or Mia Khalifa or others like them who have tweeted, Rahul Gandhi meets these people for anti-India propaganda, Patra claimed.

The title of this press conference is “Rahul, Rihanna and racket,” Patra said, accusing Gandhi of using farmers’ protests for his political interests and instigating people.

He noted that farmers have been saying that they have nothing to do with politics, and said Gandhi has shown his “immaturity” by trying to talk on their behalf.

Gandhi on Wednesday said India’s reputation has taken a “massive hit” and its biggest strength, its soft power, has been “shattered” by the BJP and the RSS.

He defended the massive barricading done by the Delhi Police to block farmers protesting at several Delhi border points from entering into the national capital, saying cops have taken measures to ensure that the violence which happened on January 26 is not repeated.

Even the Congress and Gandhi had asked why farmers were allowed to enter Red Fort, and they are now upset at the Delhi Police for taking preventing measures, he said, adding that they want conflict and police firing so that there are dead bodies and they can do politics over it.

Asked about Gandhi’s allegation that there is no leadership in India, Patra mocked him, saying he might have the Congress on his mind.

To a question about Gandhi’s tweet, seen as a veiled dig at Prime Minister Narendra Modi, wondering why the names of so many dictators begin with ‘M’, Patra noted that the names of former prime minister Manmohan Singh and Mahatma Gandhi also begin with the same letter.

Patra also objected to the Punjab government and the Congress deciding to provide legal aid to those against whom the police has taken legal action for the Republic Day incidents in the national capital during the farmers’ tractor rally.

“They were earlier alleging that BJP agents were responsible for the violence. And now they are providing them legal aid. There is no institution in the country that would stand with anarchists and the rioters of January 26. Are these people associated with Rahul Gandhi that he is ready to provide legal aid to them,” he asked.

Attacking Gandhi for his allegation that the government wants to “kill” the farmers, he said the Delhi Police acted with admirable restraint and noted that over 28 farmers were killed in a police firing in 1998 in Madhya Pradesh when the Congress was in power.

“You (Gandhi) have done politics over the dead bodies of farmers. You are spreading lies,” he said.