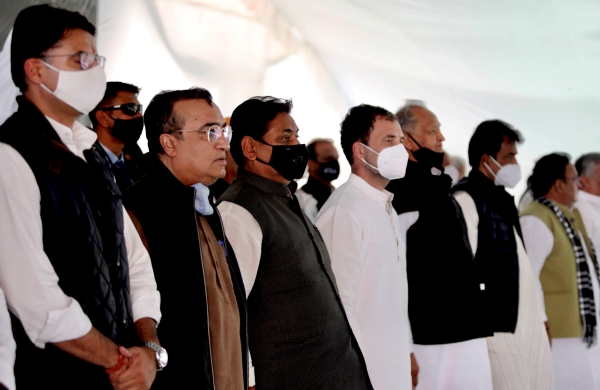 Express News Service
JAIPUR: The political significance of Rahul Gandhi’s two-day trip in Rajasthan is now being discussed at length among political circles in Jaipur. While it may have led to a greater connect with farmers in the state, Rahul’s tour has hardly reduced the factionalism in the state Congress.

Even a cursory look at Rahul Gandhi’s ‘Kisan Mahapanchayats’ in Rajasthan reflects the diminished stature for Sachin Pilot. Unlike earlier, Pilot was not made to sit beside Gandhi on the dais though CM Gehlot was seated next to Rahul in all rallies. Even the raising of hands in unity – with Gandhi in the center and Gehlot and Pilot on his two sides – was not seen at any rally on this tour.

Instead of Pilot, it was the new Rajasthan PCC Chief Govind Singh Dotasra, who got more prominence on this trip of Rahul Gandhi. He not only sat beside Rahul on the dais but even travelled in the car with Gandhi along with CM Gehlot. Even during the tractor rally in Ajmer, it was Dotasara and Gehlot – and not Pilot – who were seated on the same tractor as Rahul Gandhi. Sources in the Congress say that Gehlot strategy in this tour was to promote Dotasra while Sachin’s stature is demoted.

A Gehlot loyalist, on condition of anonymity, remarked, “Sachin Pilot held a series of farmer rallies before Rahul Ji’s visit and the Pilot camp had hoped that he would once again emerge as the second pole of Rajasthan Congress. But the Rahul Gandhi trip has dashed all those hopes. Ashok Gehlot has emerged stronger and as the unquestioned leader of the Congress in the desert state.”

Political circles say that the Rahul trip has further strengthened the impression that Gehlot is providing able leadership in Rajasthan and his connect with the Gandhi family is a very special and strong bond.

Interestingly, at one rally where all leaders were seated on ‘charpais’ (cots) to create a rural ambience for the Mahapanchayat, the cot on which Pilot was sitting broke down. This too is being used by Gehlot loyalists to make critical comments on Pilot as they question why is it that ‘charpai’ of Sachin broke down – a clever effort to link this freak incident with Pilot’s sliding stars.

While not many from the Pilot camp are willing to discuss these issues, they insist that the changed situations in the Rahul trip were only in accordance with party protocols. Since Pilot is no longer PCC Chief or Deputy CM, he could not be given any special treatment. But they argue that there is no decline in Pilot’s standing or rapport with the Gandhis and that all will be fine once the political appointments, including in the Gehlot ministry, are undertaken in the near future.