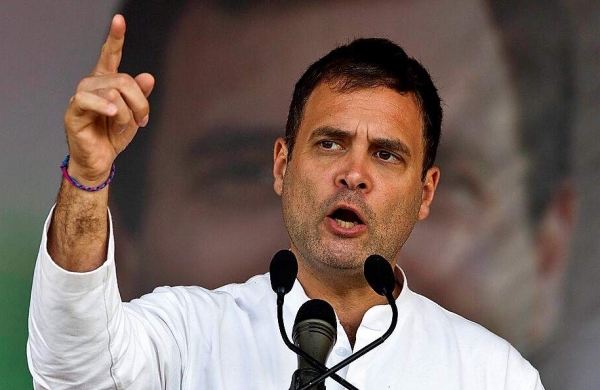 By PTI
NEW DELHI: Congress leader Rahul Gandhi on Wednesday hit out at the government over the “high” COVID vaccine prices, saying the system has once again failed Indian citizens.

“People’s money was given to vaccine companies to develop COVID vaccines. Now, GOI will make the same people pay the highest price in the world for these vaccines,” he alleged on Twitter.

People’s money was given to vaccine companies to develop Covid vaccines.Now, GOI will make same people pay the highest price in the world for these vaccines.Once again, the failed ‘system’ fails our citizens for Modi-mitrs’ profit. pic.twitter.com/3TELXqmZwK
— Rahul Gandhi (@RahulGandhi) April 28, 2021

“Once again, the failed ‘system’ fails our citizens for Modi-mitrs’ profit,” he said.

Congress leader Jairam Ramesh also lamented that only 2.36 crore people have been fully vaccinated in the country.

“In January 2021, the Modi government set a target of vaccinating 30 crore Indians by August 2021.

While 12.12 crore have received 1 dose of vaccine, ONLY 2.36 crore are FULLY vaccinated. That’s around 8 percent.

“Increasing vaccine supply and rate of vaccination must be of HIGHEST priority, and is a huge collective enterprise,” Ramesh said on Twitter.

Congress spokesperson Supriya Shrinate alleged that people are unable to log on to the CoWIN web portal for registering themselves for the next vaccination phase starting May 1 and highlighted the “shortage” of vaccines in the country.

Gandhi and his Congress party have slammed the Centre’s new vaccination policy, terming it as discriminatory due to its differential pricing.

The BJP hit back at Gandhi, saying the Congress leader should not use vaccine for his “misinformation war”.

“Mr Disinformation Gandhi, first you tried to mislead India on the ‘Made in India’ vaccines. Now you’re again trying to create confusion.

“Also, you need not worry about the prices,” Sarma said, adding that the prime minister will ensure that those who can’t afford will get free COVID vaccine.

He said the COVID-19 vaccination campaign is incomparable to any other vaccination effort undertaken by India.

“Let us all show our support and be a part of this historic process!’ Sarma tweeted.

While people above 45 years of age and frontline workers are being provided free vaccine by the Centre, private establishments and state governments have been allowed to administer vaccine to those between 18 to 44 of age, but they will have to pay for it unless decided otherwise by the state government.

Nearly 20 states and union territories have already announced that they will provide free vaccination to all adults.

Vaccine manufacturers Serum Institute and Bharat Biotech have announced that they would provide the vaccine to states at Rs 400 and Rs 600 respectively.

SII would provide the vaccine to private hospitals at Rs 600 and Bharat Biotech said it would sell for Rs 1200 per dose of their vaccine.