Rahul asks people not to ‘experiment’ in Punjab polls, to choose Congress 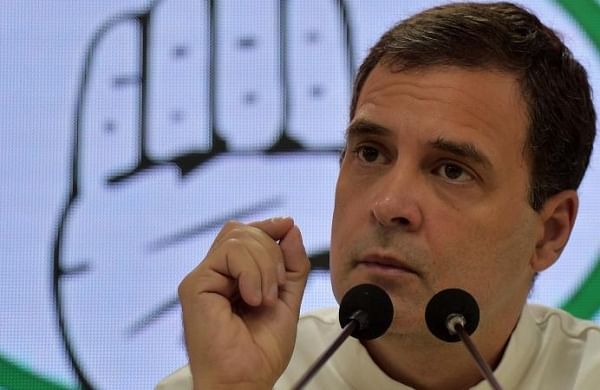 HOSHIARPUR/GURDASPUR: Congress leader Rahul Gandhi on Monday cautioned people against going for any “experiment” in the Punjab assembly polls, saying that maintaining peace was most important for the state and only his party was capable of it.

Addressing poll rallies in Hoshiarpur and Gurdaspur, Gandhi asserted that his party understands Punjab very well and can take the state forward.

The Congress leader also targeted Prime Minister Narendra Modi over unemployment, saying he does not talk about it and black money in his election speeches.

Gandhi also attacked Union Home Minister Amit Shah over his statement on the drug menace in Punjab, and asked him why he did not speak on the subject when his party’s previous alliance partner Shiromani Akali Dal was in power in the state.

Gandhi also promised that the drug problem would be wiped out from Punjab if his party returns to power in the state.

He said Punjab is a “sensitive” state and it is only the Congress which knows how to protect peace in the state.

“Punjab’s peace is the most important thing. Remember, this is not a laboratory, not a chemistry lab to carry out an experiment, because if peace goes and if hatred starts to spread here, it will not only be Punjab’s, but nation’s loss.”

“You understand the Congress party. It can take everyone along and maintain peace. We have experience in doing so. This is not the time to experiment,” said Gandhi, while seeking a clear mandate to bring his party to power in the state again.

Chief Minister Charanjit Singh Channi, who was scheduled to attend the Hoshiarpur rally, was unable to do so.

He later said that his chopper was not allowed to fly because of the no-fly zone declared in view of Prime Minister Narendra Modi’s Punjab visit.

Taking on the Arvind Kejriwal-led Aam Aadmi Party, Gandhi said it does not understand Punjab and cannot take care of the state.

Attacking Congress’ rivals, he said the state cannot be run with false promises.

Deriding the AAP over its claims of setting up mohalla clinics, Gandhi said everyone saw the state of affairs during the second wave of COVID-19 in Delhi.

“If they (AAP) changed Delhi’s picture, why Congress workers had to provide oxygen cylinders to people during the second wave of Covid. The AAP government in Delhi completely failed during Covid,” he said.

Targeting AAP over its promise of giving Rs 1,000 to every woman in Punjab aged 18 years each month if it comes to power, Gandhi said as Navjot Singh Sidhu pointed out in the rally the age bracket over 18 was chosen with an eye to garner votes.

“They (Kejriwal-AAP) can do anything for vote, they can seek apology (referring to Kejriwal) from (SAD leader) Bikram Majithia,” he said.

“But Congress party does not do vote bank politics. Punjab for us is not just a state, it is India’s soul, it safeguards our nation, this state should never become weak and if all sections stand together, no power can touch Punjab,” he said.

The Congress leader targeted the Centre over demonetisation and goods and services tax, alleging that only two-three billionaires benefited from it.

“We have Punjab elections before us. This is not an ordinary election. You have to elect a new government,” said Gandhi.

Hitting out at the Centre, he said, “In the country today, unemployment is rising in every state.”

The Congress leader recalled how the SAD and the BJP had made fun of him when he had raised the drug problem issue in Punjab.

Gandhi also recalled how the BJP had mocked him when he had cautioned how adversely Covid would impact India.

He said the people have been told a “lie” on Covid deaths and the actually number of fatalities is five to seven times more than what has been officially announced.

Apparently referring to the registration of NDPS case against Akali leader Bikram Singh Majithia, Gandhi said, “We will continue to take action and wipe out drugs from Punjab.”

He lauded Punjab farmers for agitating against the farm laws and said, “Had you not forced the repeal of these laws, then not only Punjab but farmers across India would have suffered losses.”

He also said the Congress government even gave compensation to the families of farmers who died during the agitation.

“I had earlier said that Narendra Modi will have to withdraw these farm laws because I know the strength of farmers. What I say is with careful thought,” said Gandhi.

In his address, Punjab Congress president Sidhu said, “There were two cancers in Punjab, one Capt Amarinder Singh who was thrown out (as CM by Congress). And second cancer, I will assure you that Punjab’s mafia will be eliminated from Punjab’s map when the party returns to power.”