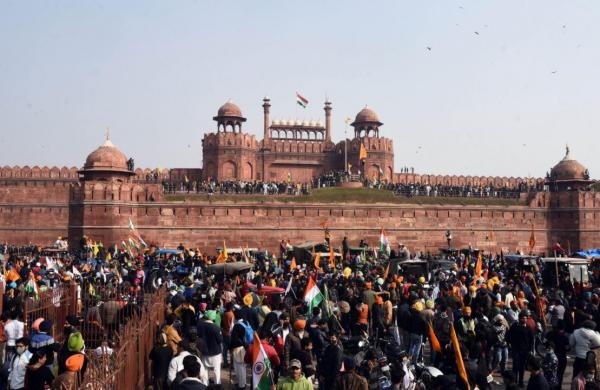 By PTI
NEW DELHI: A team of forensic experts on Saturday visited the Red Fort to collect evidence in connection with the violence that broke out at the iconic monument on Republic Day.

Thousands of protesting farmers had breached the monument on January 26 after deviating from their tractor rally route triggering a conflict with the police.

The Crime Branch of Delhi Police is investigating the matter and several teams have been formed to identify the culprits.

The force has termed the vandalisation at the fort as an “anti-national act”.

“A team of forensic experts visited Red Fort and it is collecting evidence,” an official said.

The protesting farmers had clashed with police during the tractor parade called by farmer unions to highlight their demand for repeal of the Centre’s three farm laws.

Around 50 police personnel were injured.

Many of the protesters, driving tractors, reached the Red Fort while some of them hoisted religious flags on its domes and the flagstaff at the ramparts, where the national flag is unfurled by the prime minister on Independence Day.

On Friday, the Delhi Police had issued an appeal in leading newspapers asking people to share any evidence or information about the violence.

“All members of the public, including media persons, who are witnesses to the incidents or have any information about the incident or have captured any activity on their mobile phones or camera, are hereby requested to come forward and give their statements/footage/picture in their possession at room number 215, second floor, Old Delhi Police Headquarters, ITO during office hours, on any working day or contact on 8750871237 or 011-23490094 or send e-mail on kisanandolanriots.26jain2021@gmmail.com,” the appeal stated.