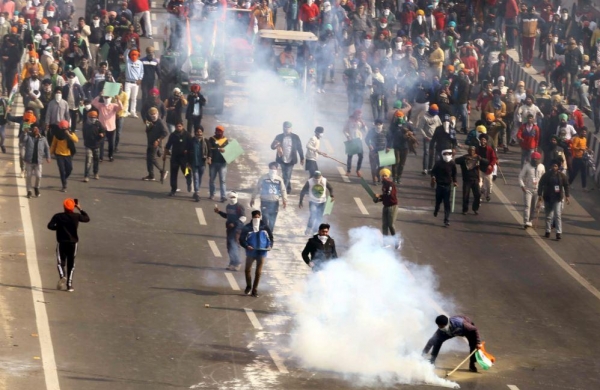 By PTI
NEW DELHI: The family of a 25-year-old man, who died after his tractor overturned at Central Delhi’s ITO during the protesting farmers’ tractor parade on the Republic Day, moved the Delhi Court on Wednesday seeking a court-monitored SIT probe into the incident.

The petition, which is likely to be listed for hearing on Thursday, is filed by deceased Navreet Singh’s grandfather who has sought enforcement of his right to fair investigation and justice as well as the right to know the truth about his grandson’s death.

According to the police, the man had died as his tractor overturned at ITO where many farmers participating in the parade had reached from the Ghazipur border after taking a detour from the pre-agreed route for the march.

The police had claimed that the man was driving the tractor and he came under the vehicle as it overturned.

However, the petition said that as per eye-witness accounts reported in the media, Navreet was driving his tractor past the Andhra Education Society in New Delhi, and he was allegedly shot by policemen, due to which he lost control of his tractor which thereafter collided with some barricades and overturned.

It also sought a direction that the SIT shall file periodic status reports before the court to ensure a time bound court monitored investigation.

The petitioner’s grandson was lying in a critically injured condition under the overturned tractor, however, despite the presence of a large number of police men including senior police officials in the vicinity, no attempts were made by Delhi Police to provide immediate critical medical intervention to save the life of the petitioner’s grandson.

“Instead, the Delhi Police resorted to tear gas shelling to prevent other protestors from reaching the site where the tractor lay with the petitioner’s grandson’s body underneath. No efforts were made by the Delhi Police to cordon off the site of the incident and to collect time sensitive material evidence from the site, which was allowed to be erased and destroyed,” the petition claimed.

It alleged that no steps, as mandated under the Code of Criminal Procedure, were taken by the police after the unnatural death of Navreet to carry out inquest proceedings.

“In the face of such apathy and hostility by the Delhi Police, the body of the petitioner’s grandson was recovered by other farmers and later handed over to the petitioner’s family, who took the body to their native place in Rampur, Uttar Pradesh,”it said.

The plea said that the entire incident was captured by multiple CCTV cameras installed in the vicinity, however, the police cited technical difficulties and did not facilitate the farmers in viewing the CCTV footage.

It said the victim’s post mortem was conducted the next day at the District Hospital in Rampur but the video or x-ray reports were not shared with the family.

It said the medical/ forensic experts who have reviewed the description of injuries in the post mortem report have independently made statements, reported by various media houses, opining that the injuries are consistent with firearm / gunshot wounds and that the said injuries could not have resulted from the tractor overturning, as has been repeatedly asserted and announced by the Delhi Police.

“The haste with which the Delhi Police has made public statements declaring the incident to be an accident, as well as registered FIRs against senior journalists who have pursued the possibility of Navreet Singh’s death having resulted from a firearm injury, inspires no confidence in the petitioner that the Delhi Police would conduct a fair and honest investigation into the death / murder of his grandson,” it claimed.

The petition has arrayed Home Department of Delhi government, SHO of IP Estate police station here, SHO of Bilaspur police station in UP and Chief Medical Officer of District Hospital at Rampur as parties.